For a small network, this is no problem. On large multicast networks, it’s not a good idea. First of all, it takes time to manually configure each router, but it’s also prone to errors. When your RP fails, there’s no automatic way to recover from it. You’ll have to configure all routers to use another router as the RP.

Luckily for us, there are two discovery protocols that we can use to automatically find an RP on the network:

This lesson is about Auto-RP so we’ll cover BSR in another lesson. Auto-RP is a Cisco proprietary protocol that uses two different roles:

The candidate RP is a router that announces itself that it wants to be an RP for the network. It does so by sending RP announcement packets to the 224.0.1.39 multicast address.

The mapping agent listens to the RP announcement packets from our RP candidates and makes a list of all possible RPs. It will then elect an RP and informs the rest of the network with RP mapping packets that are sent to multicast address 224.0.1.40.

Let’s look at an example: 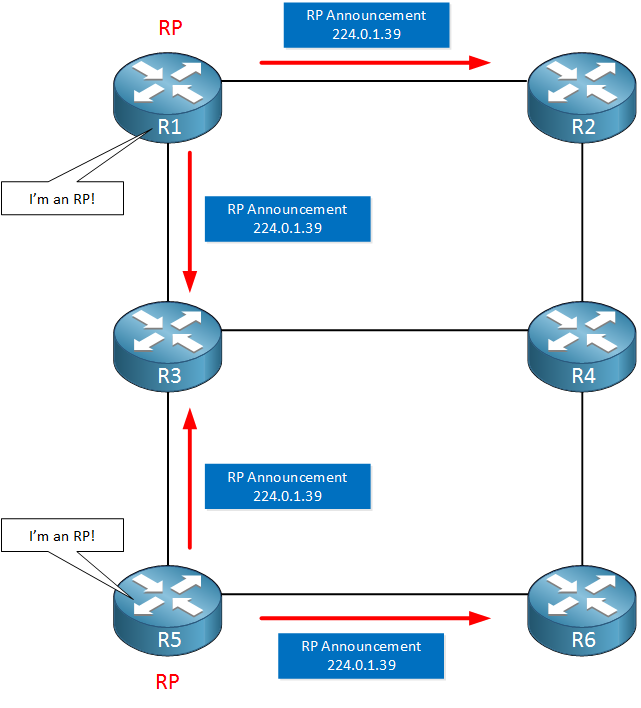 Above we have a small network with 6 routers. R1 and R5 are advertising themselves as rendezvous points in the network. These two routers will send their RP announcements packets to 224.0.1.39 on all directly connected interfaces where PIM is enabled. One of our routers will become the mapping agent, take a look below: 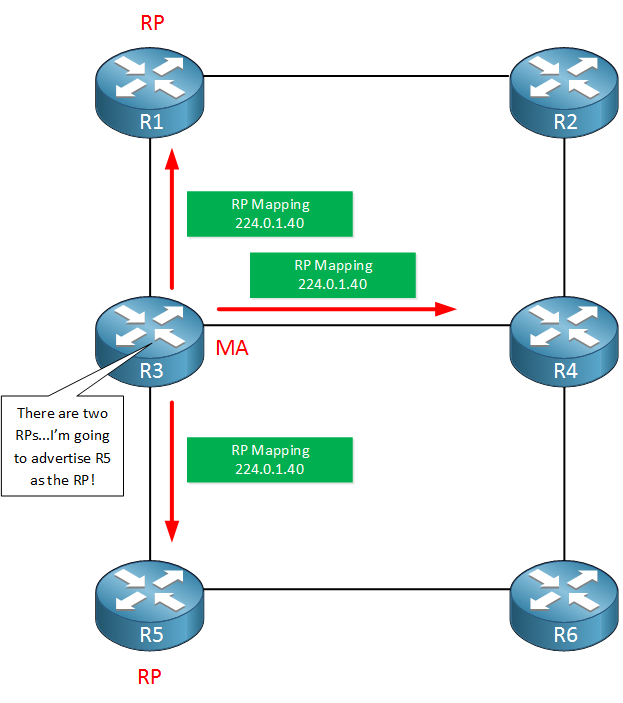 Above you can see that R3 is the mapping agent in our network. It has received the RP announcement packets from R1 and R5, and has elected R5 as the RP that will be advertised to the network. When two candidate RPs want to become RP for the same group(s) then the mapping agent will prefer the RP with the highest IP address.

R3 will advertise RP mapping packets that contain the RP address of R5 and the groups that it will serve. These are sent on all directly connected interfaces where PIM is enabled.

So far so good, there is one problem though. Above you can see that R3 sends these packets to R1, R4 and R5. These routers have now learned which RP they can use.

What about R2 and R6? Take a look below: 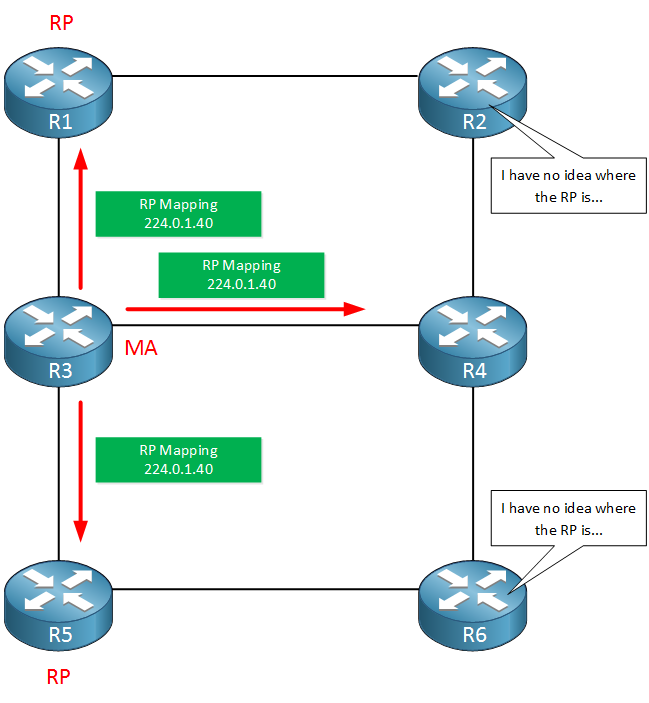 R2 and R6 didn’t receive the RP mapping packets. Why?

Keep in mind we are using PIM sparse mode here, multicast traffic is only forwarded when a router requests it with a PIM join message. This PIM join message is sent to the RP.

PIM dense mode works the other way around. Multicast traffic is flooded everywhere and then pruned with PIM prune messages.

How do we solve it? There are two options:

PIM sparse-dense mode is an extension to PIM sparse mode. It allows our multicast routers to use dense mode for multicast groups that don’t have an RP configured. When your router knows the RP, it will use sparse mode. If it doesn’t know the RP…it will use dense mode. This allows traffic to 224.0.1.40 to be flooded throughout the network so that R2 and R6 can also learn the RP address.

In the example above, R2 and R6 were unable to learn the RP address since they didn’t receive the RP mapping packets to 224.0.1.40. The same problem can occur with the mapping agent. Since R3 is directly connected to R1 and R5, it was able to receive the RP announce packets to 224.0.1.39. If R3 was not directly connected to the RPs, then it would not have received these packets.

Let’s take a look at Auto RP in action. To demonstrate this, I will use the following topology: 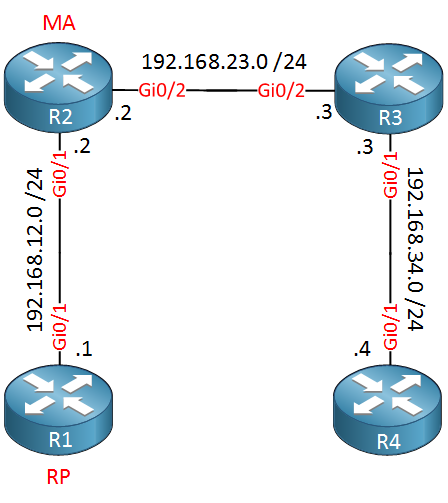 Above we have 4 routers. Our goal is that all routers should learn the RP address. R1 is the RP, R2 is the mapping agent. OSPF has been pre-configured so that all networks are reachable.

First, we need to enable multicast routing on all routers:

Before we configure the RP and mapping agent, let’s take a look at the multicast routing tables:

44 more replies! Ask a question or join the discussion by visiting our Community Forum