IPsec (Internet Protocol Security) is a framework that helps us to protect IP traffic on the network layer. Why? because the IP protocol itself doesn’t have any security features at all. IPsec can protect our traffic with the following features:

As a framework, IPsec uses a variety of protocols to implement the features I described above. Here’s an overview: 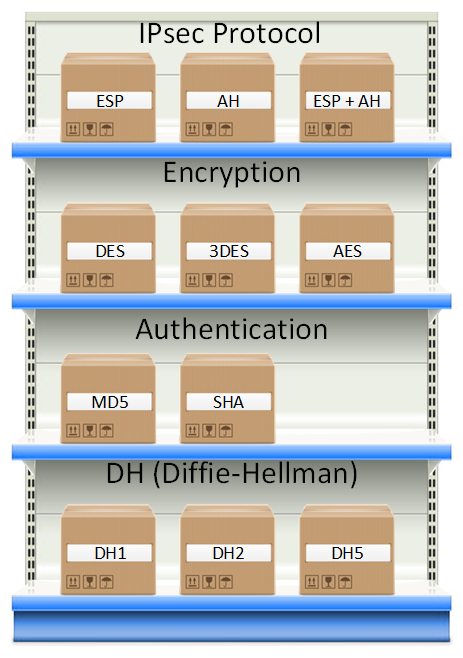 Don’t worry about all the boxes you see in the picture above, we will cover each of those. To give you an example, for encryption we can choose if we want to use DES, 3DES or AES. For authentication you can choose between MD5 or SHA.

IPsec can be used on many different devices, it’s used on routers, firewalls, hosts and servers. Here are some examples how you can use it:

IPsec is pretty complex and there are a lot of different ways to implement it. In this lesson I will start with an overview and then we will take a closer look at each of the components.

Before we can protect any IP packets, we need two IPsec peers that build the IPsec tunnel.

To establish an IPsec tunnel, we use a protocol called IKE (Internet Key Exchange).

There are two phases to build an IPsec tunnel:

In IKE phase 1, two peers will negotiate about the encryption, authentication, hashing and other protocols that they want to use and some other parameters that are required. In this phase, an ISAKMP (Internet Security Association and Key Management Protocol) session is established. This is also called the ISAKMP tunnel or IKE phase 1 tunnel.

The collection of parameters that the two devices will use is called a SA (Security Association). Here’s an example of two routers that have established the IKE phase 1 tunnel:

Here’s a picture of our two routers that completed IKE phase 2:

IKE builds the tunnels for us but it doesn’t authenticate or encrypt user data. We use two other protocols for this:

AH and ESP both offer authentication and integrity but only ESP supports encryption. Because of this, ESP is the most popular choice nowadays.

The main difference between the two is that with transport mode we will use the original IP header while in tunnel mode, we use a new IP header. Here’s an example to help you visualize this:

Transport mode is often between two devices that want to protect some insecure traffic (example: telnet traffic). Tunnel mode is typically used for site-to-site VPNs where we need to encapsulate the original IP packet since these are mostly private IP addresses and can’t be routed on the Internet. I will explain these two modes in detail later in this lesson.

The entire process of IPsec consists of five steps:

Now you have an idea of the basics of IPsec, let’s take a closer look at each of the different components.

IKE (Internet Key Exchange) is one of the primary protocols for IPsec since it establishes the security association between two peers. There are two versions of IKE:

IKEv1 was introduced around 1998 and superseded by IKEv2 in 2005. There are some differences between the two versions:

The list with advantages goes on but for now, let’s focus on understanding IKE. As explained before, IKE uses two phases:

Let’s discuss what happens at each phase. Everything I explain below applies to IKEv1.

The main purpose of IKE phase 1 is to establish a secure tunnel that we can use for IKE phase 2.

We can break down phase 1 in three simple steps:

The peer that has traffic that should be protected will initiate the IKE phase 1 negotiation. The two peers will negotiate about the following items:

Once the negotiation has succeeded, the two peers will know what policy to use. They will now use the DH group that they negotiated to exchange keying material. The end result will be that both peers will have a shared key.

The last step is that the two peers will authenticate each other using the authentication method that they agreed upon on in the negotiation. When the authentication is successful, we have completed IKE phase 1. The end result is a IKE phase 1 tunnel (aka ISAKMP tunnel) which is bidirectional. This means that both peers can send and receive on this tunnel.

The three steps above can be completed using two different modes:

IKEv1 main mode uses 6 messages. I will show you these in Wireshark and I’ll explain the different fields. 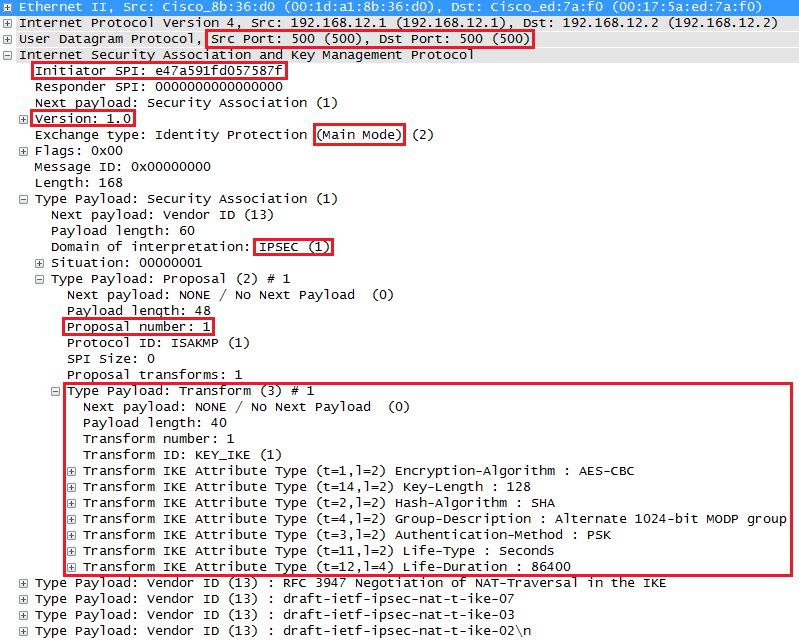 The initiator (peer that wants to build the tunnel) will send the first message. This is a proposal for the security association. Above you can see that the initiator uses IP address 192.168.12.1 and is sending a proposal to responder (peer we want to connect to) 192.168.12.2. IKE uses UDP port 500 for this. In the output above you can see an initiator SPI (Security Parameter Index), this is a unique value that identifies this security association.

We can see the IKE version (1.0) and that we are using main mode. The domain of interpretation is IPsec and this is the first proposal. In the transform payload you can find the attributes that we want to use for this security association. 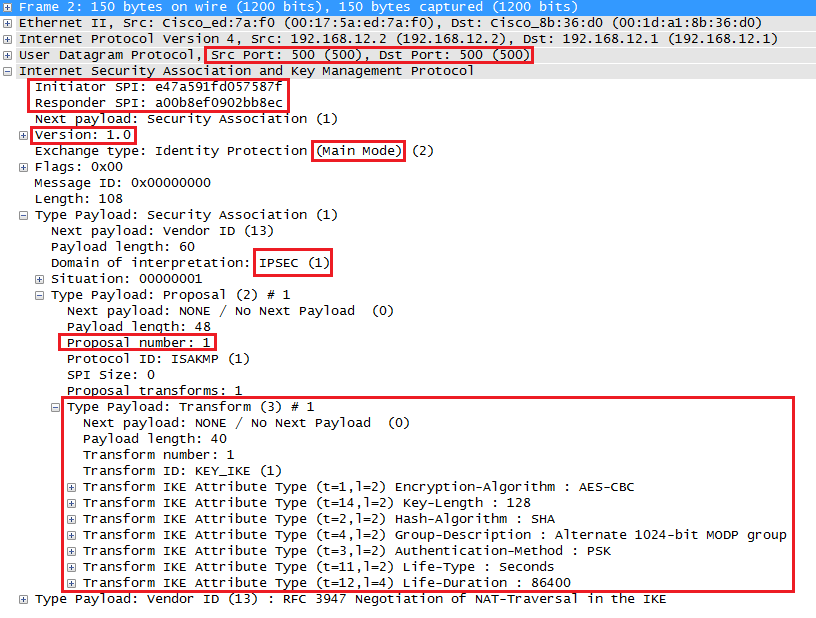 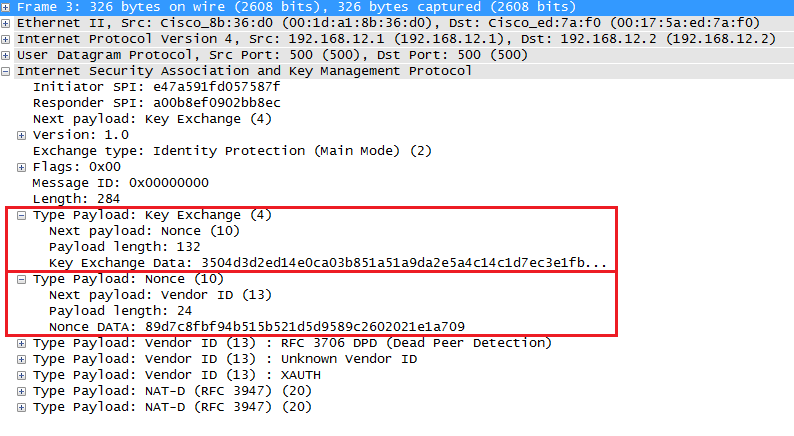 Since our peers agree on the security association to use, the initiator will start the Diffie Hellman key exchange. In the output above you can see the payload for the key exchange and the nonce. 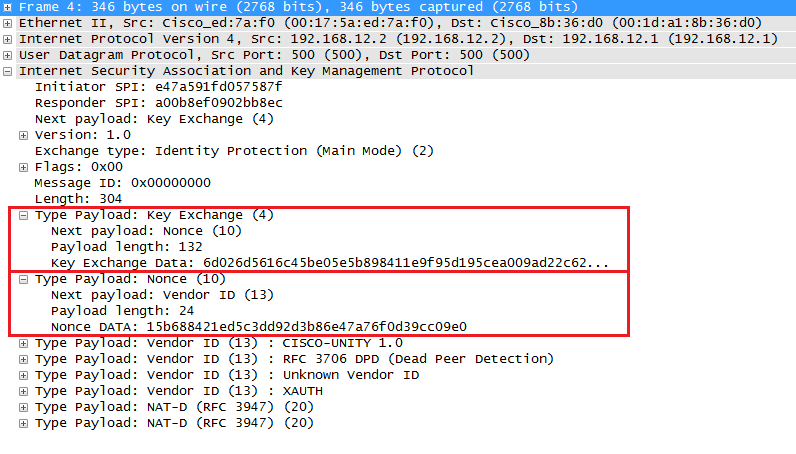 The last two messages are encrypted so we can’t see its contents anymore. These two are used for identification and authentication of each peer. The initiator starts.

And above we have the 6th message from the responder with its identification and authentication information. IKEv1 main mode has now completed and we can continue with IKE phase 2.

Before we continue with phase 2, let me show you aggressive mode first.

IKEv1 aggressive mode only requires three messages to establish the security association. It’s quicker than main mode since it adds all the information required for the DH exchange in the first two messages. Main mode is considered more secure since identification is encrypted, aggressive mode does this in clear-text.

Let’s take a look at the different messages. 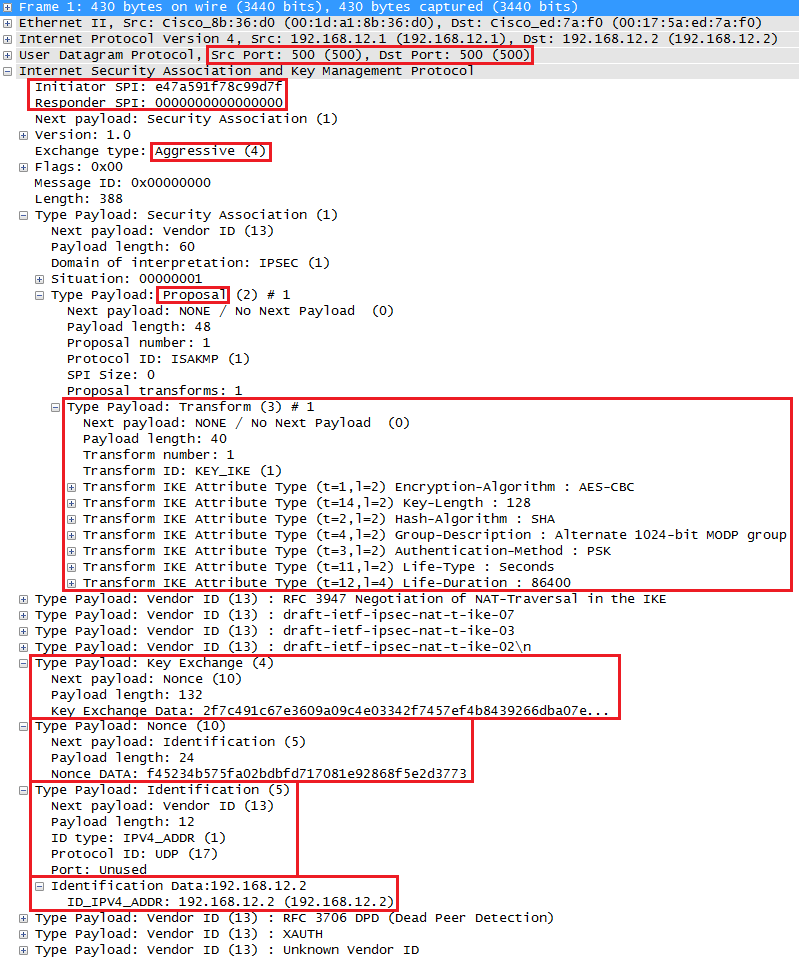 The first message is from the initiator (192.168.12.1) to the responder (192.168.12.2).  You can see the transform payload with the security association attributes , DH nonces and the identification (in clear text) in this single message. 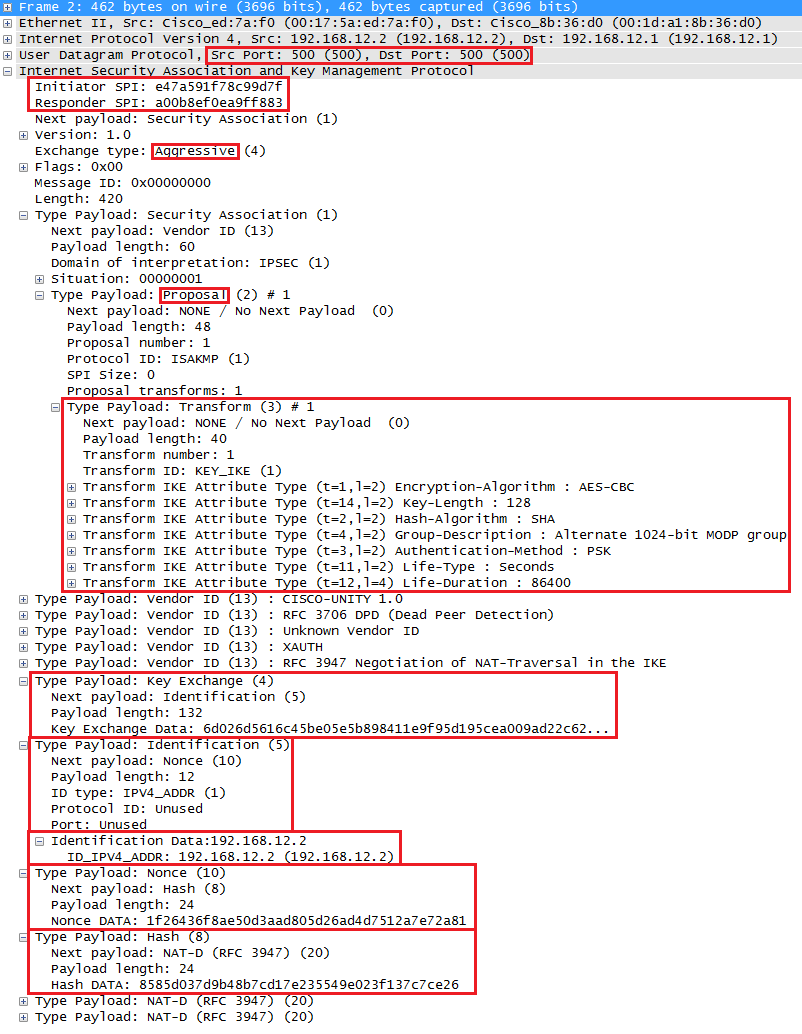 Both peers have everything they need, the last message from the initiator is a hash that is used for authentication.

Our IKE phase 1 tunnel is now up and running and we are ready to continue with IKE phase 2.

Just like in IKE phase 1, our peers will negotiate about a number of items:

PFS is optional and forces the peers to run the DH exchange again to generate a new shared key in each IKE phase 2 quick mode.

This negotiation happens within the protection of our IKE phase 1 tunnel so we can’t see anything. Just for the sake of completeness, here’s what it looks like in wireshark:

Once IKE phase 2 has completed, we are finally ready to protect some user data. Let’s see how this is done…

IKEv2 doesn’t have a main or aggressive mode for phase 1 and there’s no quick mode in phase 2. It still has two phases though, phase 1 is called the IKE_SA_INIT and the second phase is called IKE_AUTH. Only four messages are required for the entire exchange.

AH and/or ESP are the two protocols that we use to actually protect user data. Both of them can be used in transport or tunnel mode, let’s walk through all the possible options.

AH offers authentication and integrity but it doesn’t offer any encryption. It protects the IP packet by calculating a hash value over almost all fields in the IP header. The fields it excludes are the ones that can be changed in transit (TTL and header checksum). Let’s start with transport mode…

Transport mode is simple, it just adds an AH header after the IP header. Here’s an example of an IP packet that carries some TCP traffic: 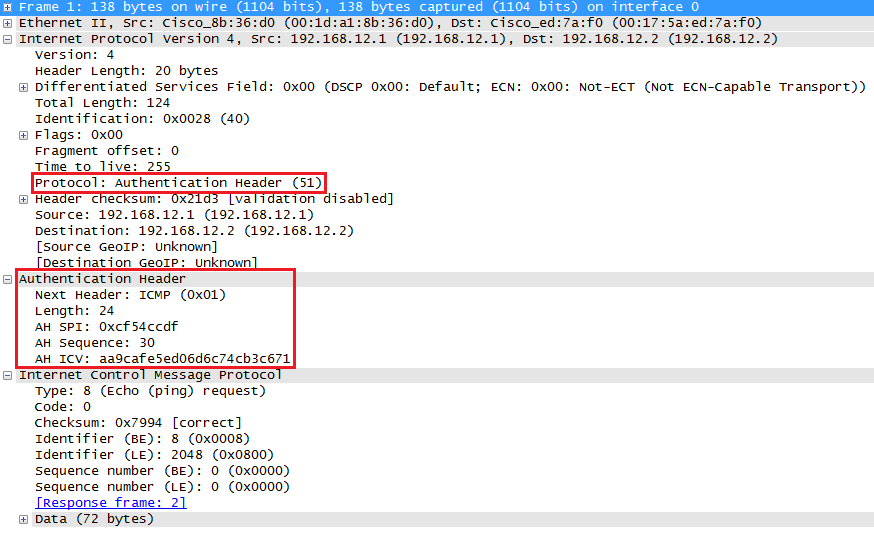 Above you can see the AH header in between the IP header and ICMP header. This is a capture I took of a ping between two routers. You can see that AH uses 5 fields:

With tunnel mode we add a new IP header on top of the original IP packet. This could be useful when you are using private IP addresses and you need to tunnel your traffic over the Internet. It’s possible with AH but it doesn’t offer encryption:

The entire IP packet will be authenticated. Here’s what it looks like in wireshark: 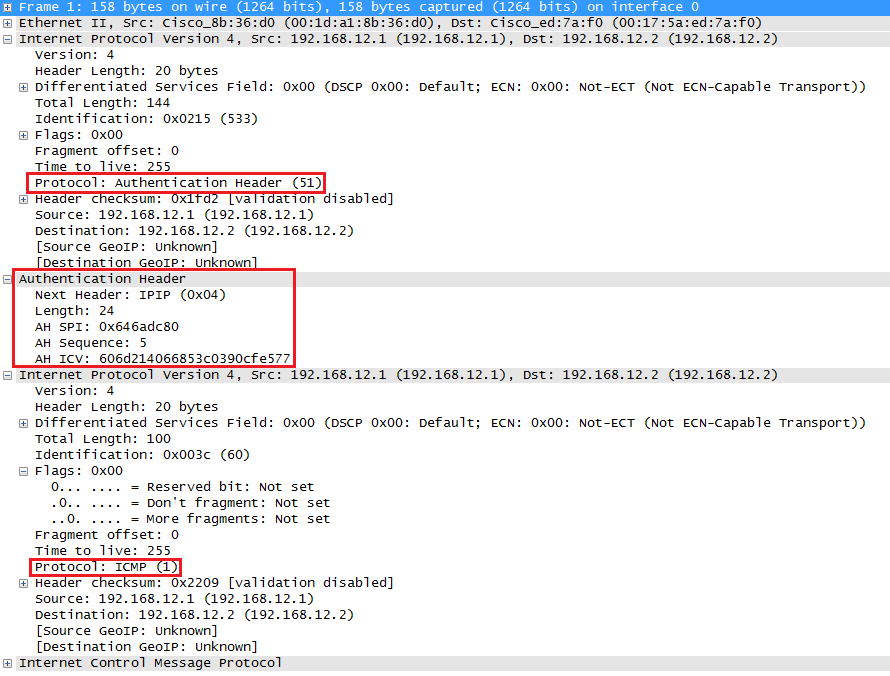 Above you can see the new IP header, then the AH header and finally the original IP packet that carries some ICMP traffic.

One problem with AH is that it doesn’t play well with NAT / PAT. Fields in the IP header like TTL and the checksum are excluded by AH because it knows these will change. The IP addresses and port numbers however are included. If you change these with NAT, the ICV of AH fails.

ESP is the more popular choice of the two since it allows you to encrypt IP traffic. We can use it in transport or tunnel mode, let’s look at both.

When we use transport mode, we use the original IP header and insert an ESP header. Here’s what it looks like:

Above you can see that we add an ESP header and trailer. Our transport layer (TCP for example) and payload will be encrypted. It also offers authentication but unlike AH, it’s not for the entire IP packet. Here’s what it looks like in wireshark:

Above you can see the original IP packet and that we are using ESP. The IP header is in cleartext but everything else is encrypted.

How about ESP in tunnel mode? This is where we use a new IP header which is useful for site-to-site VPNs:

It’s similar to transport mode but we add a new header. The original IP header is now also encrypted.

The output of the capture is above is similar to what you have seen in transport mode. The only difference is that this is a new IP header, you don’t get to see the original IP header.

This one confuses a lot of people, it’s possible to use AH and ESP at the same time. Let’s check it out!

Let’s start with transport mode, here’s what the IP packet will look like:

With transport mode we will use the original IP header, followed by an AH and ESP header. The transport layer, payload and ESP trailer will be encrypted.

Because we also use AH, the entire IP packet is authenticated. Here’s what it looks like in wireshark:

Above you can see the original IP packet, the AH header and the ESP header.

What about tunnel mode? We will add a new IP header:

First we will have a new IP header followed by the AH and ESP header. The original IP packet will be completely encrypted and everything will be authenticated thanks to AH. Here’s what it looks like in wireshark:

Above you can see the new IP header followed by the AH and ESP header.

IPsec is pretty complex…you have now seen how IKE is used to build the IPsec tunnel and how we can use AH and/or ESP to protect our traffic. Do you want to take a look at these wireshark captures yourself? I saved all of them for you:

I hope you enjoyed this lesson! Feel free to share it with your friends. If you have any questions, please leave a message in our forum. Thanks!

108 more replies! Ask a question or join the discussion by visiting our Community Forum