Nowadays, there are about more wireless than wired devices. About 10 years ago, most offices only had desktops and some other network devices like printers. All of these were connected with wires. Today, a lot of users have a laptop, smartphone, and tablet. That’s three wireless devices for each user. Wireless speeds have increased significantly, getting close to wireless Gigabit.

IEEE uses 802.11 for all protocols that are related to wireless. Most of us have seen or heard about 802.11a, 802.11b, 802.11g, 802.11n and/or 802.11ac before. We also have the Wi-Fi Alliance that helps with the promotion of wireless networking. For example, IEEE has described authentication and encryption in their 802.11i standard. The Wi-Fi alliance has based WEP, WPA, and WPA2 on this standard. These names are easier to work with than referring to 802.11i.

Your router at home probably has the same capabilities as the one below:

It is connected to your ISP through cable or DSL, or perhaps fiber. It has some Ethernet ports to connect your computers and it has antennas for wireless users. In reality, these components are all built into one device:

If you take everything apart, it looks like this:

In small networks like this, the AP does everything by itself. We call this an autonomous access point. It uses 802.11 protocols to talk with the wireless clients and uses Ethernet on the LAN side.

Since we use wireless networking for our users, it has to be close to our users. That’s why you will find access points on the access layer of your network, just like your computers and printers: 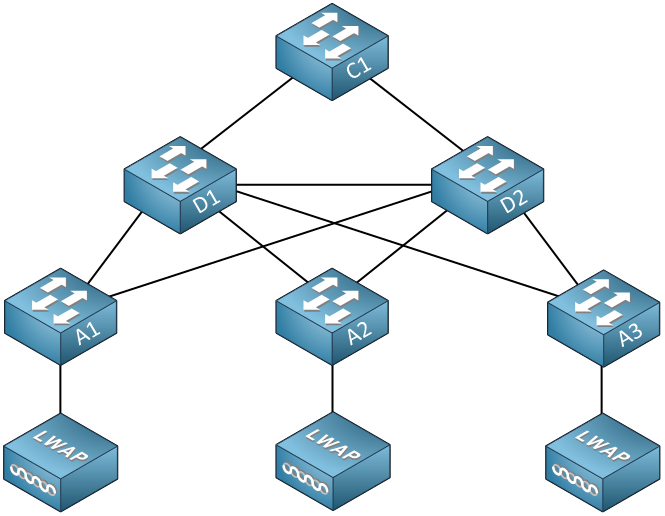 There’s still one issue. Let’s say you are connected to an access point and you start walking around the office, your phone will switch to another access point. How does this second access point know that you are already authenticated to the network? You could re-authenticate but that will break your connection…not a good idea. With autonomous access points, roaming could be difficult. To guarantee seamless roaming, the access points need to exchange authentication information of a client that roams from one access point to another.

Nowadays, most wireless networks use a wireless LAN controller: 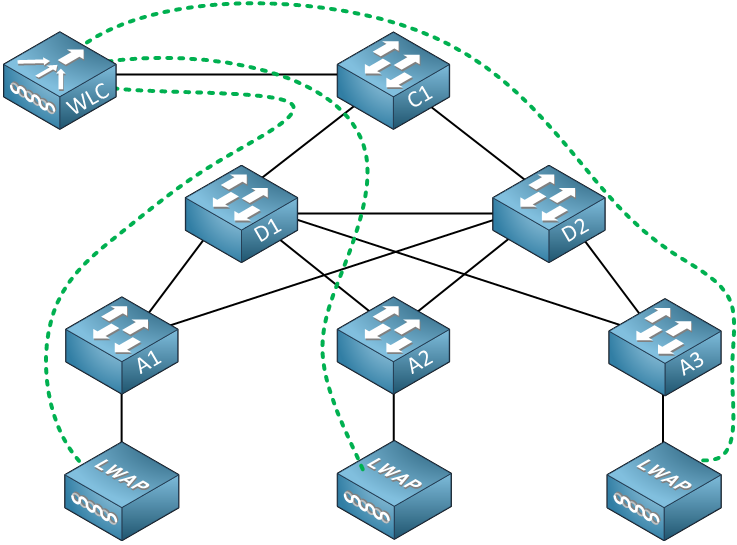 All management tasks are moved from the access points to the wireless LAN controller. It takes care of authentication, roaming, creating new wireless networks, etc. The access points are only responsible for forwarding traffic, we call these LWAPs (Light Weight Access Point).

To achieve this, all traffic has to be sent from the access points to the wireless LAN controller. This is done by tunnels called CAPWAP (Control And Provisioning of Wireless Access Points). The green dotted lines are the CAPWAP tunnels between the APs and WLC.

We now have one big wireless network. If you create a new wireless network (SSID) then it will be pushed to all access points. Roaming is also no problem since all traffic is forwarded to the WLC.

You have now learned the basics of Wireless LANs: