IP packets have a field called the Type of Service field (also known as the TOS byte). The original idea behind the TOS byte was that we could specify a priority and request a route for high throughput, low delay and high reliable service.

The TOS byte has been defined back in 1981 in RFC 791 but the way we use it has changed throughout the years. This makes it confusing to understand since there is a lot of terminology and some of is not used anymore nowadays. In this lesson, I’ll explain everything there is to know about the TOS byte, IP precedence and DSCP values.

Let’s take a look at the TOS byte: 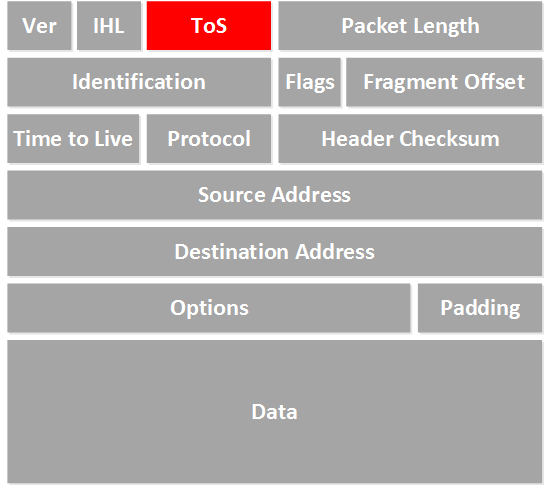 Above you see the IP header with all its fields, including the TOS byte.

So what does this byte look like? We’ll have to take some history lessons here…

In the beginning the 8 bits of the TOS byte were defined like this:

The first 3 bits are used to define a precedence. The higher the value, the more important the IP packet is, in case of congestion the router would drop the low priority packets first. The type of service bits are used to assign what kind of delay, throughput, and reliability we want.

Here’s a list of the bits and the possible combinations:

This is what they came up with in 1981 but the funny thing is that the “type of service” bits that specify delay, throughput, and reliability have never really been used. Only the precedence bits are used to assign a priority to the IP packets.

About 10 years later, in 1992 RFC 1349 was created that changes the definition of the TOS byte to look like this:

So what do we actually use nowadays?

The year is 1998 and 6 years have passed since the last changes to the TOS byte. RFC 2474 is created which describes a different TOS byte. The TOS byte gets a new name and is now called the DS field (Differentiated Services) and the 8 bits have changed as well. Here’s what it looks like now:

The first 6 bits of the DS field are used to set a codepoint that will affect the PHB (Per Hop Behavior) at each node.The codepoint is also what we call the DSCP value.

Let me rephrase this in plain English…

The codepoint is similar to precedence that we used in the TOS byte, it’s used to set a certain priority.

PHB is another fancy term that we haven’t seen before, it requires some more explanation. Imagine we have a network with 3 routers in a row, something like this:

Above we have two phones and 3 routers. When we configure QoS to prioritize the VoIP packets, we have to do it on all devices. When R1 and R3 are configured to prioritize VoIP packets while R2 treats it as any other IP packet, we can still experience issues with the quality of our phone call when there is congestion on R2.

To make QoS work, it has to be configured end-to-end. All devices in the path should prioritize the VoIP packets to make it work. There are two methods to do this:

Making a reservation sounds like a good idea since you can guarantee that we can make the phone call, it’s not a very scalable solution however since you have to make reservations for each phone call that you want to make. What if one of the routers loses its reservation information? The idea of using reservations to enforce end-to-end QoS is called IntServ (Integrated Services).

The opposite of IntServ is DiffServ (Differentiated Services) where we configure each device separately to prioritize certain traffic. This is a scalable solution since the network devices don’t have to exchange and remember any reservation information Just make sure that you configure each device correctly and that’s it…

With 6 bits for codepoints we can create a lot of different priorities…in theory, there are 64 possible values that we can choose from.

The idea behind PHB (Per Hop Behavior) is that packets that are marked with a certain codepoint will receive a certain QoS treatment (for example queuing, policing or shaping). Throughout the years, there have been some changes to the PHBs and how we use the codepoints. Let’s walk through all of them…

The default PHB means that we have a packet that is marked with a DSCP value of 000000. This packet should be treated as “best effort”.

100% Satisfaction Guaranteed!
You may cancel your monthly membership at any time.
No Questions Asked!
Previous Lesson
IntServ and RSVP
Next Lesson
QoS Classification

78 more replies! Ask a question or join the discussion by visiting our Community Forum