The two versions are compatible but how should the two behave on the link that connects the two spanning-tree protocols?

PVST+ sends BPDUs for each instance/VLAN so you could let MST process each BPDU separately with the instance that is configured for the VLAN. MST, however, doesn’t have an instance for each VLAN so what kind of BPDUs should it send?

This is an issue…it is possible that two VLANs share the same MST instance but use different root bridges, root ports, and other attributes in the PVST+ domain. Which information should MST send in its BPDUs? There is no way to create a 1:1 mapping between the MST and PVST+ information.

Instead, when an MST region is connected to a PVST+ topology, MST is going to simulate PVST+ with a feature called the PVST simulation mechanism. What it does, is that the MST region will send PVST+ BPDUs (one for each VLAN) on the interfaces that are connected to PVST+ switches. These BPDUs all carry the same information and advertise the same root bridge. The interfaces that connect to the PVST+ topology are called boundary interfaces/ports.

I’m talking about PVST+, but PVRST+ is also supported. However, MST only uses PVST+ features, so there is no performance difference.

Since PVST+ switches now receive BPDUs for each VLAN from MST carrying the same information, they will all make the same decisions when selecting a root bridge, root port, etc.

What about the other way around? From PVST+ to MST?

MST decides the port role (root, designated, non-designated) for the boundary interface for all VLANs only by looking at the information in the VLAN 1 BPDU.

If MST wants to use the boundary as a designated port. It uses the following check:

What this means is that MST listens to all PVST+ BPDUs that it receives on its boundary interface and checks if those BPDUs are superior compared to the VLAN 1 BPDU from PVST+. If so, MST can safely turn its boundary interface into a root port. If not, the switch reports an inconsistency error; the interface will be blocked and shows the broken state.

One caveat here is that PVST+ uses the system ID extension, which uses the VLAN number as part of the bridge ID. This makes it impossible to have PVST+ BPDUs from different VLANs with an identical value. Because of this, PVST+ BPDUs require a priority that is at least 4096 lower than the PVST+ VLAN 1 BPDU.


Let’s take a look at all of this in action. There are three switches I use: 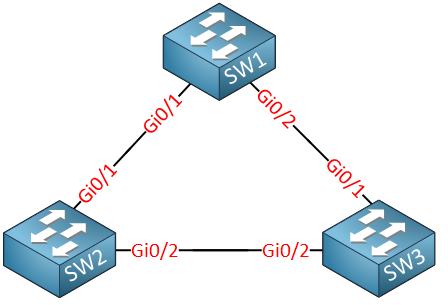 SW1 will use rapid spanning-tree, SW2 and SW3 are going to use MST. We will use three MST instances and six VLANs. Let’s start by configuring the interfaces as trunks and add some VLANs:

We now have a basic configuration that we can use.

SW3 will become the root bridge for instance 2:

SW1 is running rapid spanning-tree with its default priority. Let’s see what happens now when I try to make SW1 the new root bridge for one VLAN:

100% Satisfaction Guaranteed!
You may cancel your monthly membership at any time.
No Questions Asked!
Previous Lesson
Multiple Spanning-Tree (MST)
Next Lesson
Spanning-Tree Portfast

25 more replies! Ask a question or join the discussion by visiting our Community Forum