In this lesson I want to explain the different EIGRP packets to you.

EIGRP uses RTP (Reliable Transport Protocol) and its function is to deliver EIGRP packets between neighbors in a reliable and ordered way. It can use multicast or unicast and to keep things efficient not all packets are sent reliable. Reliable means that when we send a packet we want to get an acknowledgment from the other side to make sure that they received it. So when does EIGRP use unicast or multicast? Let’s take a look at an example: 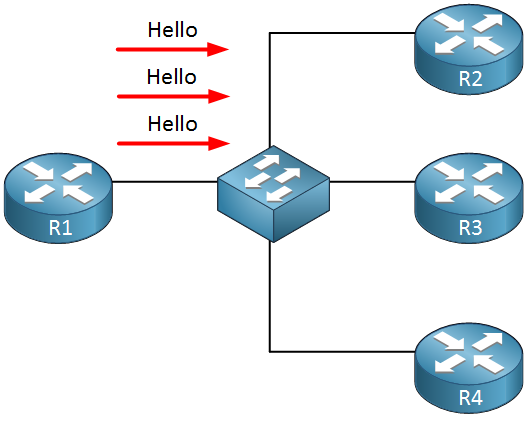 In this example we have 4 routers all running EIGRP. Hello packets are sent between routers in order to form adjacencies. As you can see R1 is sending 3 hello packets meant for R2, R3 and R4. There are 2 questions that we can ask ourselves here:

Sending 3 packets on the same link is not very useful so instead of doing this EIGRP will send hello packets by using multicast on a multi-access network like Ethernet.

Hello packets don’t have to be acknowledged since EIGRP uses a holddown time. If a router doesn’t receive hello packets in an X amount of time it will drop the neighbor adjacency.

So which packets should be acknowledged? Think about routing information, if there’s a change in the network you want to make sure all routers receive this routing update.

Let me show you all the different EIGRP packets:

Hello packets are used for neighbor discovery. As soon as you send hello packets and receive them your EIGRP routers will try to form the neighbor adjacency.

Update packets have routing information and are sent reliable to whatever router that requires this information. Update packets can be sent to a single neighbor using unicast or to a group of neighbors using multicast.

100% Satisfaction Guaranteed!
You may cancel your monthly membership at any time.
No Questions Asked!
Previous Lesson
EIGRP Configuration
Next Lesson
EIGRP Neighbor Adjacency

21 more replies! Ask a question or join the discussion by visiting our Community Forum