BSR (Bootstrap) is similar to Cisco’s AutoRP, it’s a protocol that we use to automatically find the RP (Rendezvous Point) in our multicast network. BSR however, is a standard and included in PIMv2, unlike AutoRP which is a Cisco proprietary protocol.

The BSR sends messages on a hop-by-hop basis and does so by sending its packets to multicast address 224.0.0.13 with a TTL of 1. These multicast packets have a local scope thanks to their TTL so they are not routed.When a multicast router receives the message, it will do an RPF check on the source address of the BSR and will re-send the message on all other PIM-enabled interfaces. This is a big difference with the mapping agent of AutoRP which uses multicast where we require dense mode flooding to flood the packets of the mapping agent throughout the network.

The BSR messages will contain information about the BSR and of course the RP-to-group mappings.

Here is an illustration of this process: 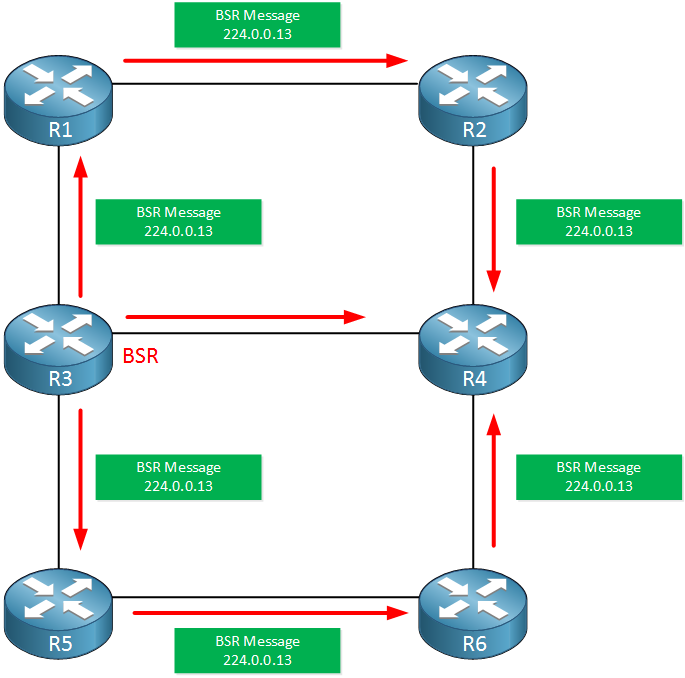 Above we have a small network with six routers. R3 is the BSR and sending BSR messages on its interfaces. All other routers will re-send these messages which allows the entire network to learn the information in the BSR messages. 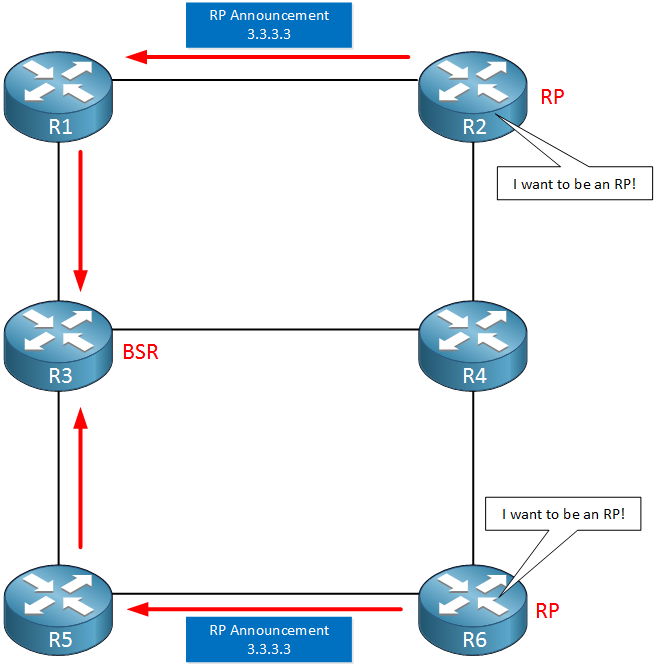 Above you can see two routers, R2 and R6 who would like to become the RP. They are sending their RP announcement packets to the unicast IP address of the BSR (3.3.3.3).

Once the BSR receives the RP announcements, it will build a list of all RPs and the multicast groups they want to serve. This is called the group-to-RP mapping set.

The hash function is used by all multicast routers to map multicast group addresses to different RPs.

for the sake of completeness, this is what the hash function looks like:

The input for this function is:

Don’t get scared by the formula above, the router will do the calculations for you 🙂

The hash mask is a 32-bit value and advertised in the BSR messages. The router takes these values, puts them in the hash function and returns a hash value. The RP with the highest hash value will be selected.

By default, the hash mask value is 0 which means that the hash value is only calculated based on the IP address of the RP.

Things become interesting when we change the hash mask. The remaining bits in the hash mask decide how many groups we map to an RP.

The hash mask is a 32-bit value so if you use a 31-bit mask, we only have one bit left. With a single bit, we can create two values which means that two multicast groups will be mapped to one RP.

If you use a 30-bit hash mask, we have two bits left. With two bits, we can create four values which means that four multicast groups will be mapped to one RP.

Let me give you an example:

We have two RPs with the same priority, both want to become the RP for the entire 239.0.0.0/8 multicast range. We have multicast listeners who want to receive traffic for the following multicast groups:

Without a hash mask, all eight multicast groups will be assigned to one RP.

With a 31-bit hash mask, we assign two multicast groups to each RP:

If you use a 30-bit hash mask, we assign four multicast groups to each RP:

This is a nice way to configure load balancing between RPs. The hash mask that you choose decides how many groups you map to one RP.

You have now learned the basics of BSR. Let’s see it in action! I will use the following topology for this example: 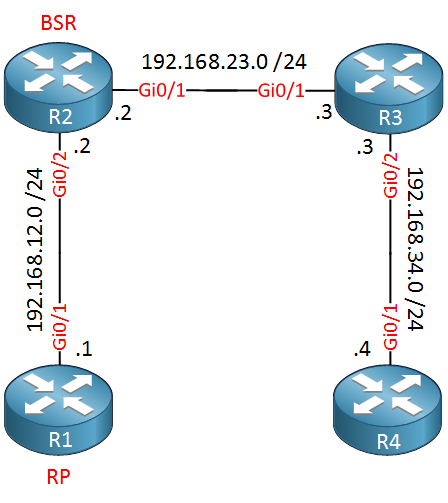 First, we enable multicast routing on all routers::

100% Satisfaction Guaranteed!
You may cancel your monthly membership at any time.
No Questions Asked!
Previous Lesson
PIM AutoRP
Next Lesson
PIM Bidirectional