DMVPN (Dynamic Multipoint VPN) is a routing technique we can use to build a VPN network with multiple sites without having to statically configure all devices. It’s a “hub and spoke” network where the spokes will be able to communicate with each other directly without having to go through the hub. Encryption is supported through IPsec which makes DMVPN a popular choice for connecting different sites using regular Internet connections. It’s a great backup or alternative to private networks like MPLS VPN. A popular alternative to DMVPN is FlexVPN.

There are four pieces to the DMVPN puzzle:

Let me explain these different topics…

Our “regular” GRE tunnels are point-to-point and don’t scale well. For example, let’s say we have a company network with some sites that we want to connect to each other using regular Internet connections: 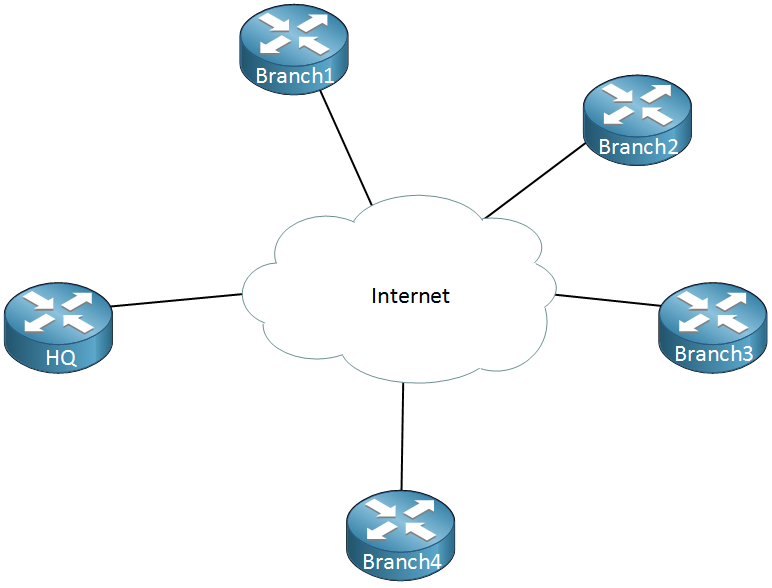 Above we have one router that represents the HQ and there are four branch offices. Let’s say that we have the following requirements:

To accomplish this we will have to configure a  bunch of GRE tunnels which will look like this: 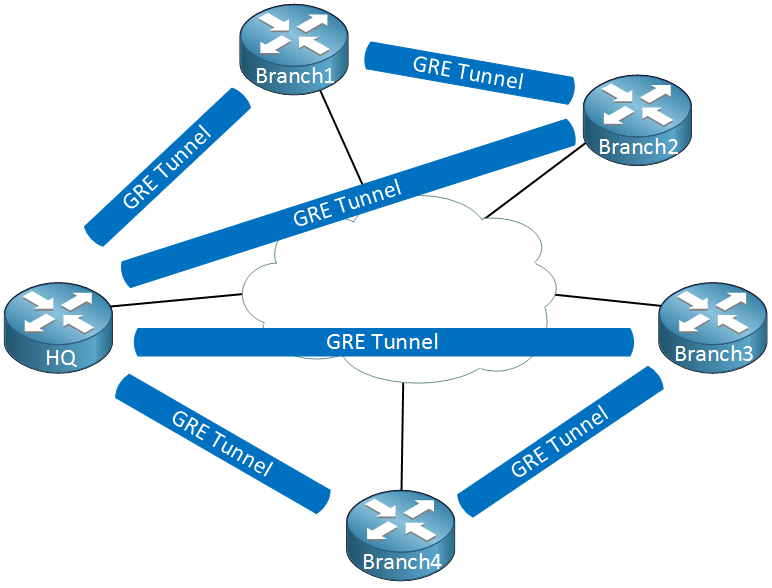 Thing will get messy quickly…we have to create multiple tunnel interfaces, set the source/destination IP addresses etc. It will work but it’s not a very scalable solution. Multipoint GRE, as the name implies allows us to have multiple destinations. When we use them, our picture could look like this: 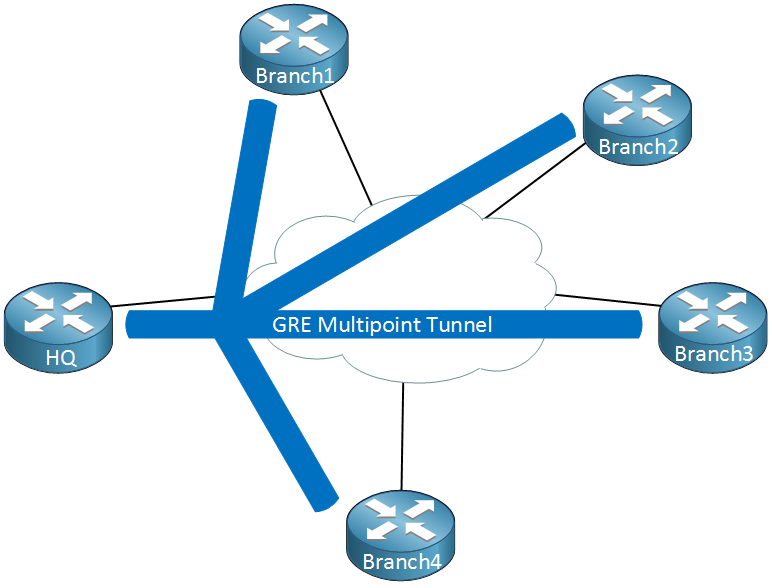 When we use GRE Multipoint, there will be only one tunnel interface on each router. The HQ for example has one tunnel with each branch office as its destination. Now you might be wondering, what about the requirement where branch office 1/2 and branch office 3/4 have a direct tunnel?

Right now we have a hub and spoke topology. The cool thing about DMVPN is that we use multipoint GRE so we can have multiple destinations. When we need to tunnel something between branch office 1/2 or 3/4, we automatically “build” new tunnels: 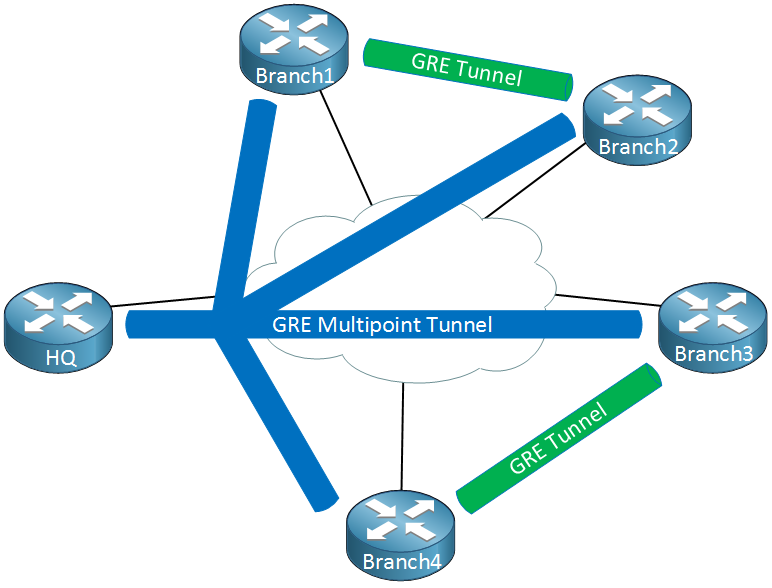 When there is traffic between the branch offices, we can tunnel it directly instead of sending it through the HQ router. This sounds pretty cool but it introduces some problems…

When we configure point-to-point GRE tunnels we have to configure a source and destination IP address that are used to build the GRE tunnel. When two branch routers want to tunnel some traffic, how do they know what IP addresses to use? Let me show you what I’m talking about: 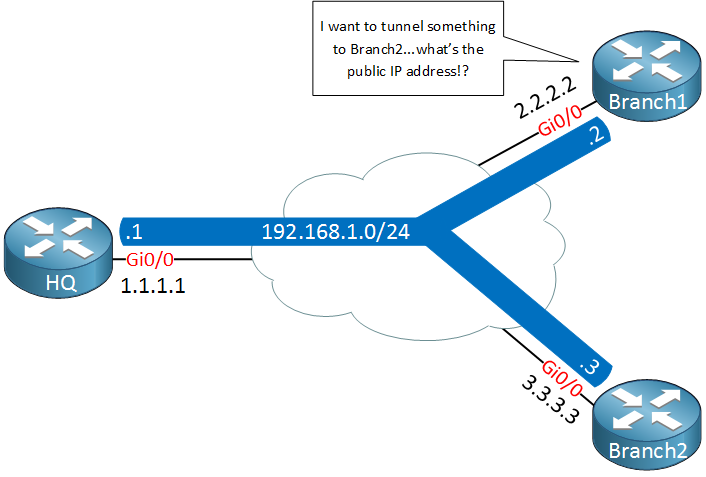 Above we have our HQ and two branch routers, branch1 and branch2. Each router is connected to the Internet and has a public IP address:

On the GRE multipoint tunnel interface we use a single subnet with the following private IP addresses:

To fix this problem, we need some help from another protocol…

We need something that helps our branch1 router figure out what the  public IP address is of the branch2 router, we do this with a protocol called NHRP (Next Hop Resolution Protocol). Here’s an explanation of how NHRP works:

Since NHRP uses this server and clients model, it makes sense to use a hub and spoke topology for multipoint GRE. Our hub router will be the NHRP server and all other routers will be the spokes.

Here’s an an illustration of how NHRP works with multipoint GRE: 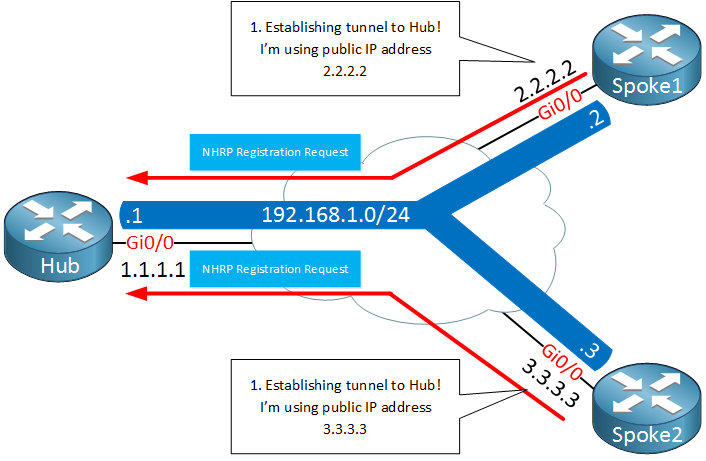 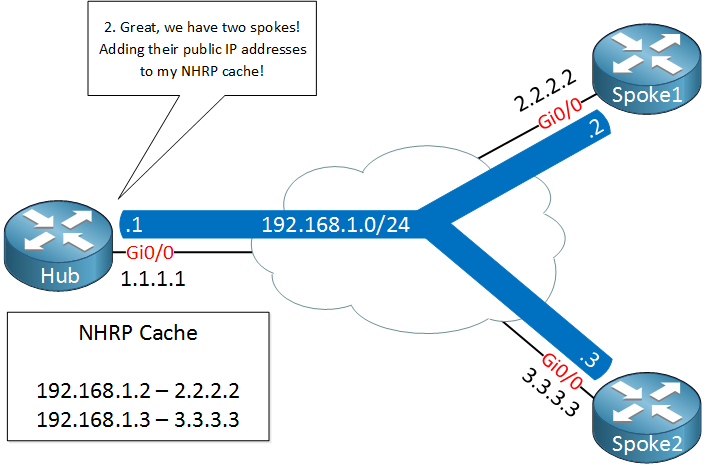 The hub, our NHRP server will create a mapping between the public IP addresses and the IP addresses of the tunnel interfaces. 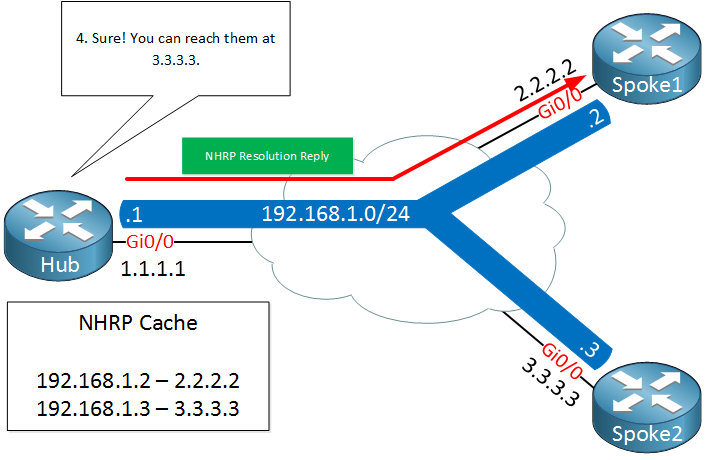 The Hub router checks its cache, finds an entry for spoke 2 and sends the NHRP resolution reply to spoke1 with the public IP address of spoke2. 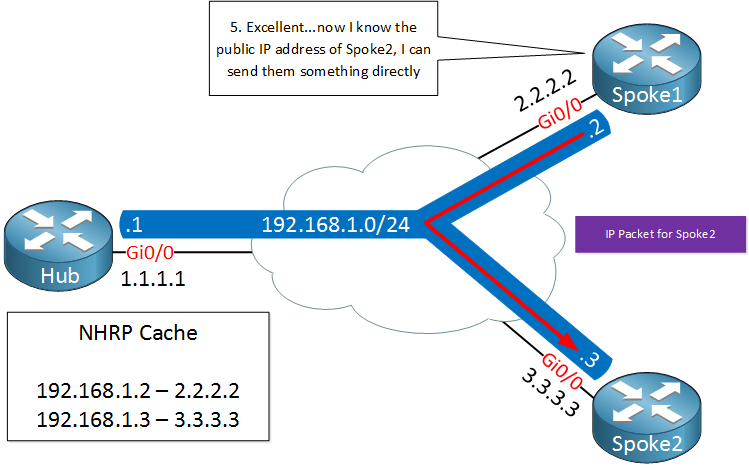 Spoke1 now knows the destination public IP address of spoke2 and is able to tunnel something directly. This is great, we only required the hub to figure out what the public IP address is and all traffic can be sent from spoke to spoke directly.

In NHRP terminology , you’ll see that we don’t talk about “public IP addresses” but NBMA addresses. NHRP is an old protocol (the RFC is from 1998) which was originally developed for NBMA networks like frame-relay or ATM.

When we talk about DMVPN, we often refer to an underlay and overlay network:

NHRP is a bit similar to ARP or frame-relay inverse ARP. Instead of mapping L2 to L3 information, we are now mapping a tunnel IP address to a NBMA IP address.

DMVPN has different versions which we call phases, there’s three of them:

Let me give you an overview of the three phases:

With phase 1 we use NHRP so that spokes can register themselves with the hub. The hub is the only router that is using a multipoint GRE interface, all spokes will be using regular point-to-point GRE tunnel interfaces. This means that there will be no direct spoke-to-spoke communication, all traffic has to go through the hub!

Since our traffic has to go through the hub, our routing configuration will be quite simple. Spoke routers only need a summary or default route to the hub to reach other spoke routers.

There are two requirements to make spoke to spoke tunnels work:

59 more replies! Ask a question or join the discussion by visiting our Community Forum