Networks have many components that work together to create a functioning network. Just think of the different protocols that operate on the different layers of the OSI model. For example, to name a few:

Not to mention the dozens of applications on the application layer. Besides network equipment like routers, switches, and firewalls, we also have client devices, servers, printers, etc.

In an ideal world, we only have legitimate users who access our network. Unfortunately, not everyone who connects to your network has good intentions. Therefore, we need to protect our network and our legitimate users. Before you can secure something, you need to have an understanding of:

You can’t protect what you don’t know or understand. In this lesson, we’ll go through an overview of different attacks and vulnerabilities, and countermeasures.

There are many different attacks. Here is an overview:

We can also spoof our MAC address and request an IP address from a DHCP server. Do this repeatedly, and the DHCP server won’t have any free IP addresses left in its DHCP server pool. Some of these attacks can be prevented with the following solutions:

In a normal situation, we have clients that make connections to other clients, servers, or network devices like printers. Servers have enough RAM and CPU power for the users they intend to serve. Our routers and switches have enough capacity to forward Ethernet frames and route IP packets.

With a DoS attack, we attempt to deplete resources, causing systems to become unavailable or crash. There are many ways to do this. It could be as simple as a ping flood where we send many ICMP echo (ping) packets. We can also attempt to flood a target with UDP or TCP packets.

For example, think about the TCP three-way handshake for a minute. An attacker could send many TCP SYNs to a server, usually with a spoofed source IP address. The server replies with an SYN-ACK, but this packet will never make it back to the source to complete the three-way handshake. These incomplete connections will remain in the server until they time out. Do this enough times, and the server will be unable to accept new connections. 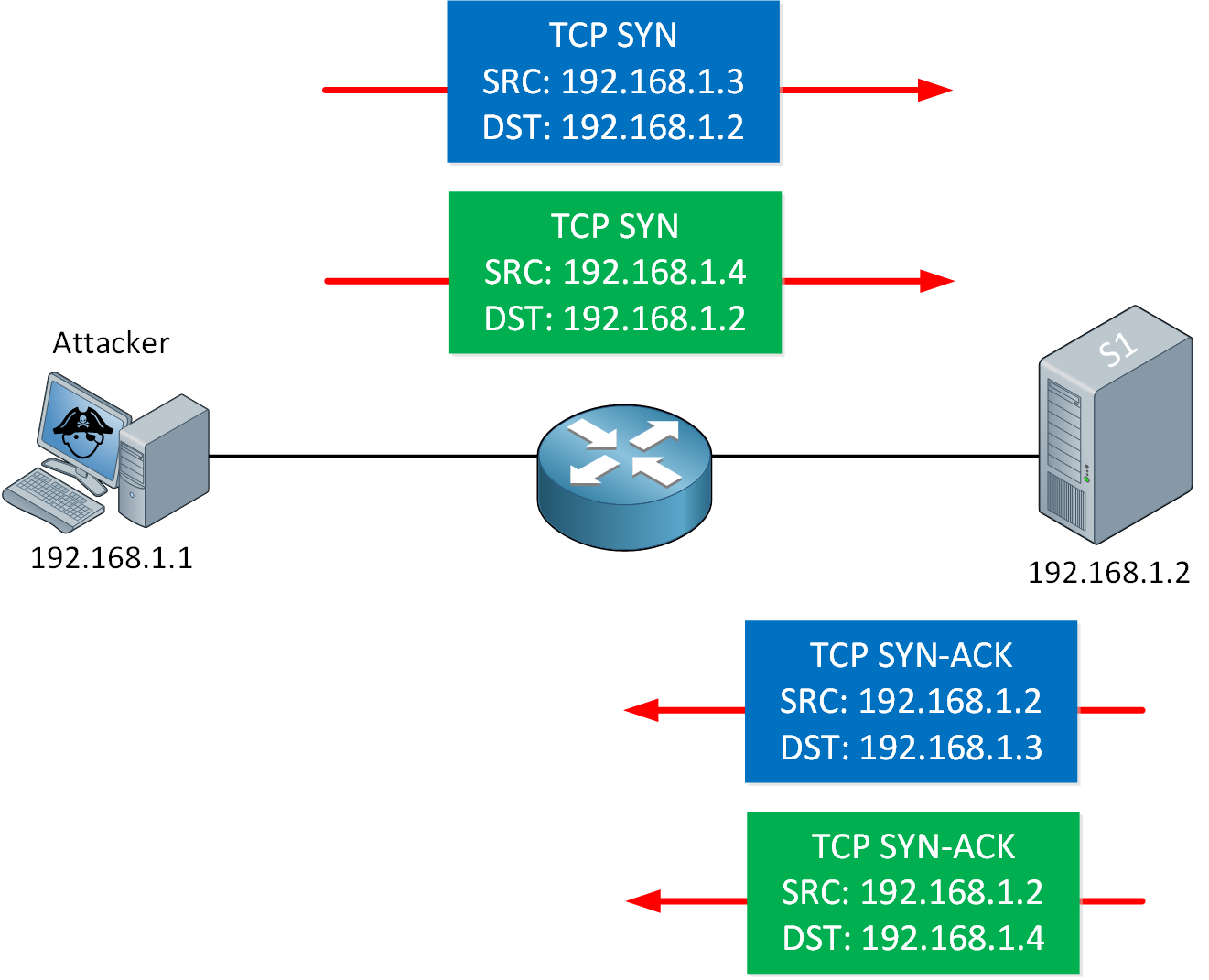 The next level of a DoS attack is a distributed DoS (DDoS) attack. The attacker has a master “controller” and looks for computers or devices with vulnerabilities to infect. An infected device joins the master controller and becomes a “bot”. The attacker can use these bots to launch an attack. DDoS attacks can be difficult to deal with. At the time of writing, the largest DDoS attack (against Microsoft) was 3.47 Tbps and originated from 10,000 sources. 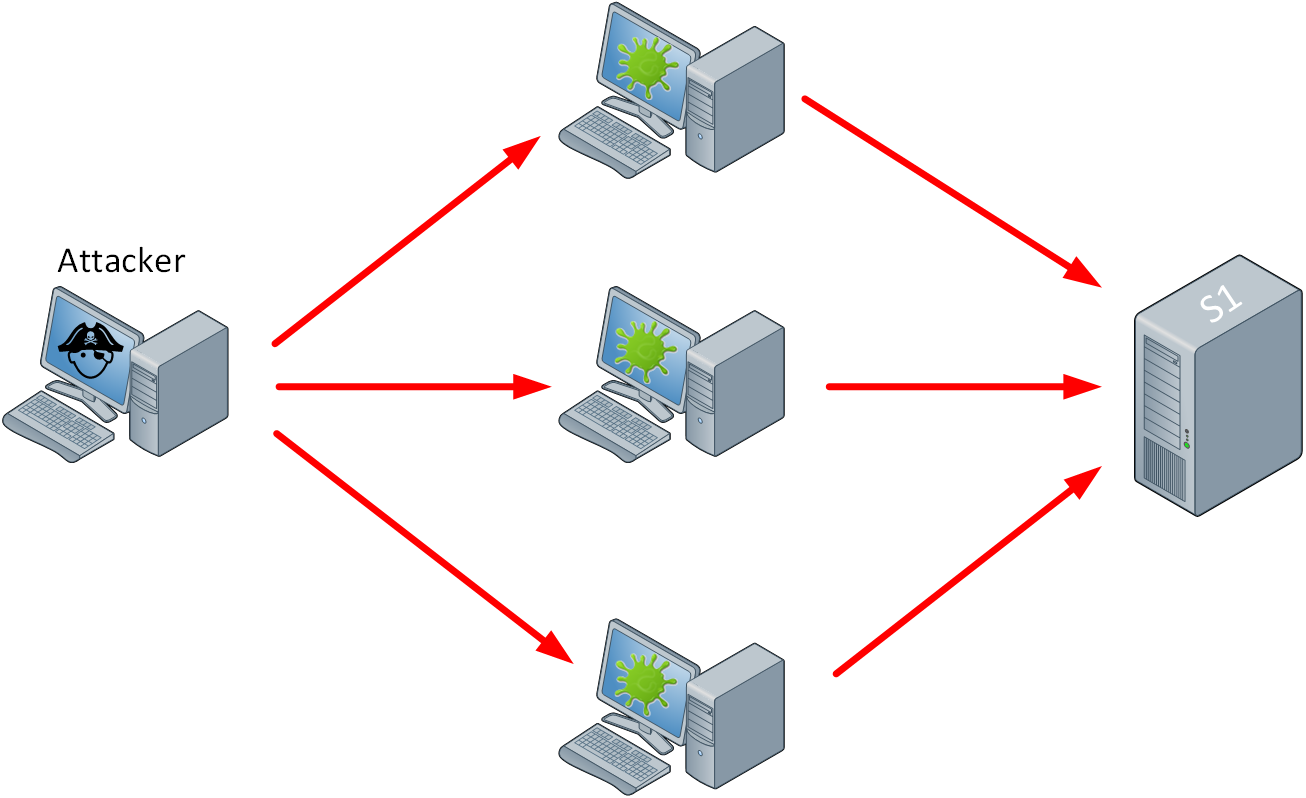 A reflection attack uses address spoofing and a reflector to forward traffic to another target. Here is an example: 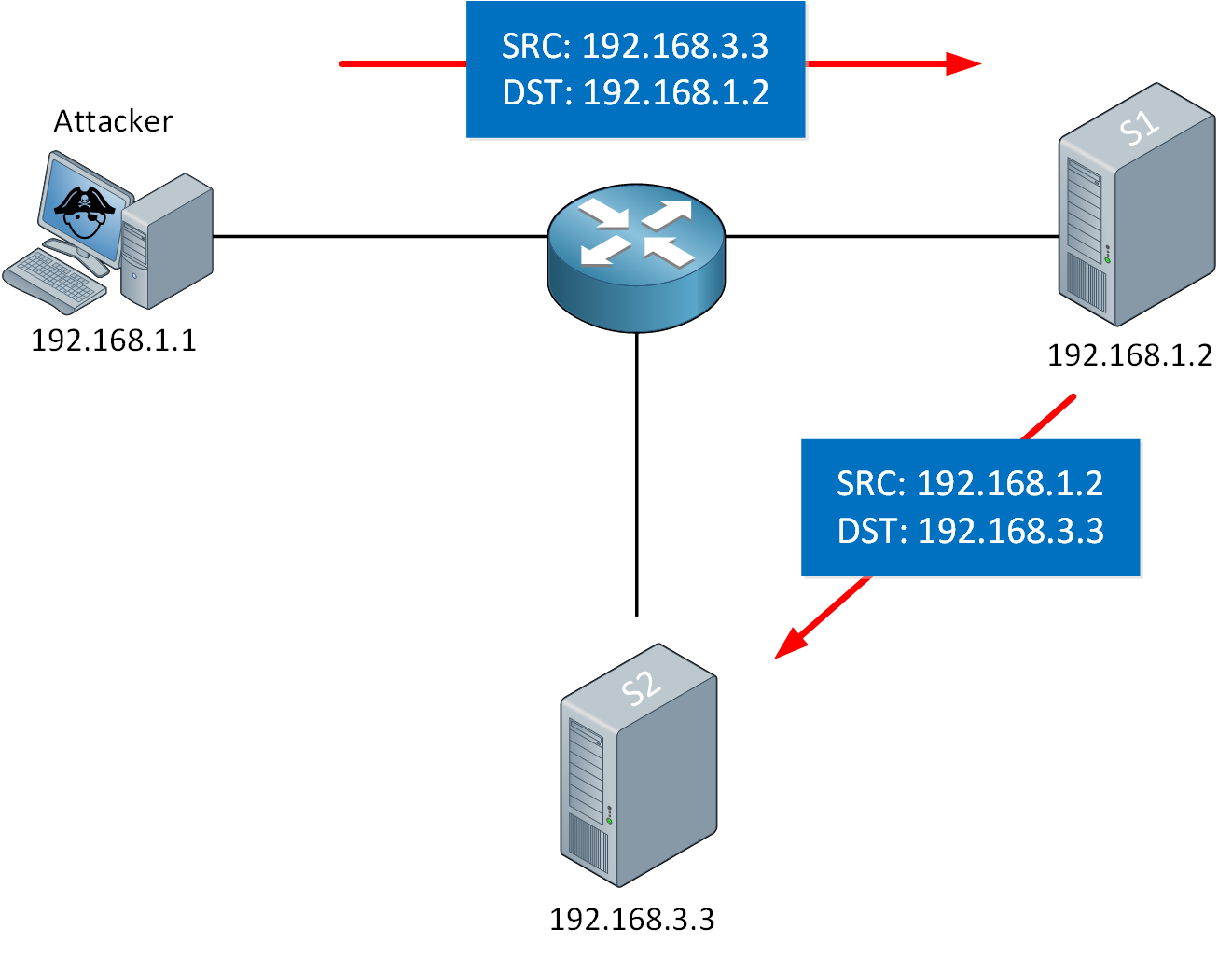 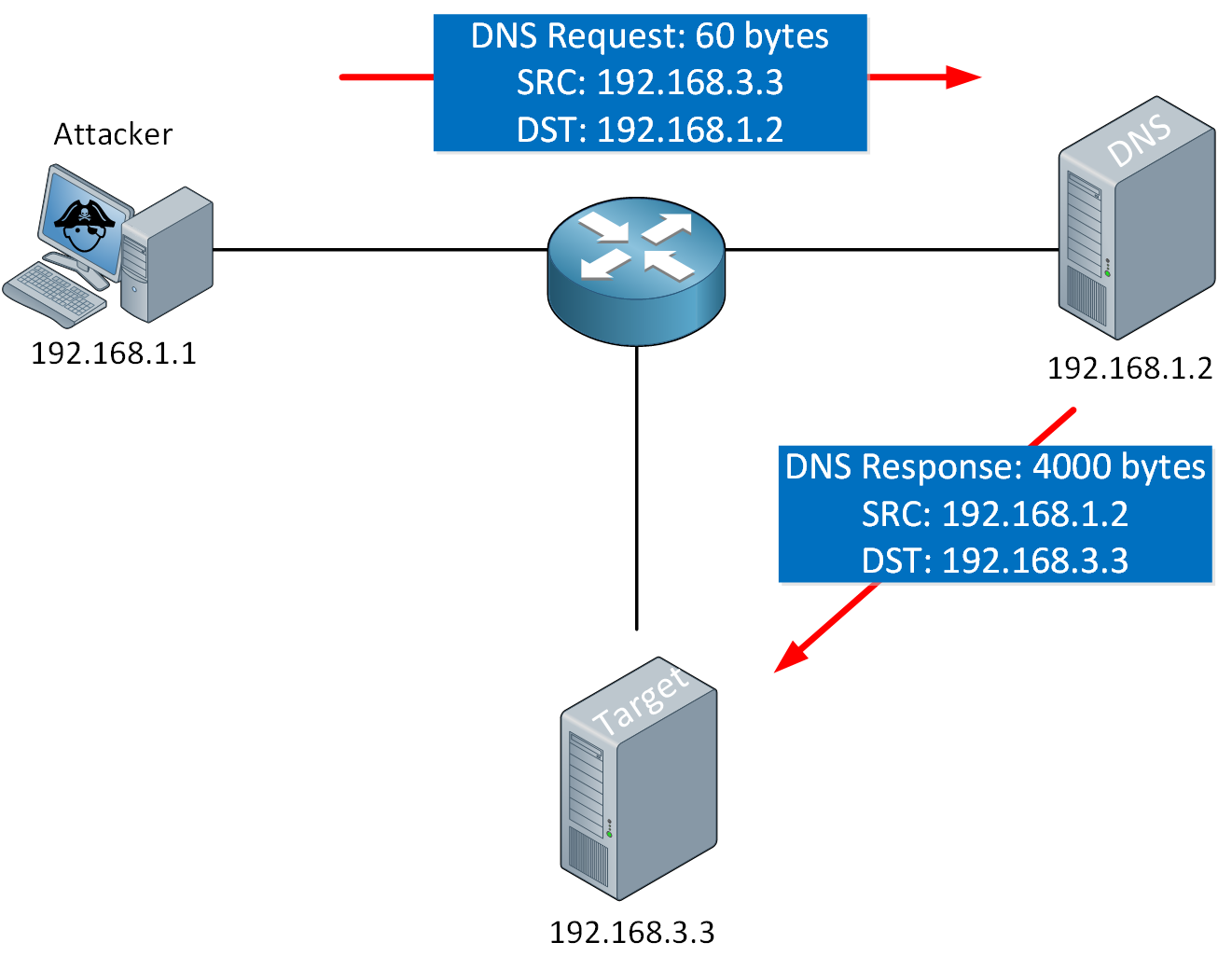 Man in the middle (MiTM) attacks

Besides eavesdropping, an attack might attempt to modify data that is sent between the two devices. 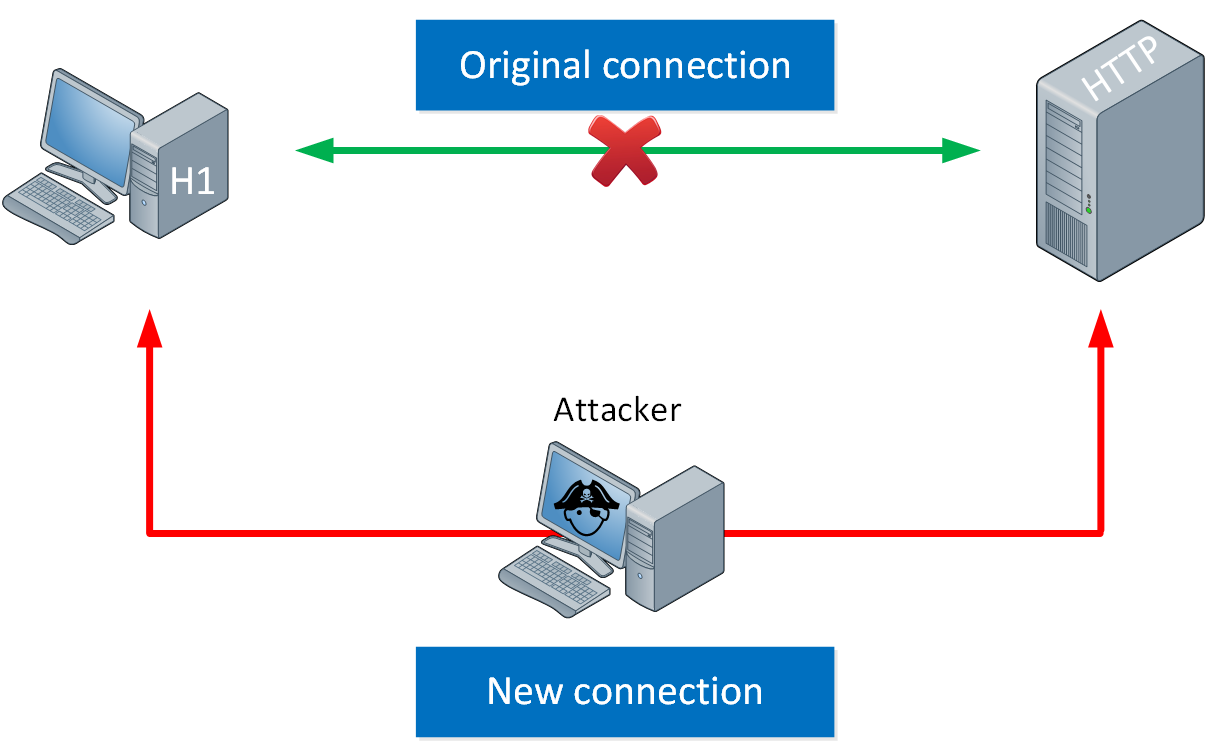 A reconnaissance attack is not a “real” attack. Before an attacker launches an attack, he or she might want as much information as possible. The attacker will learn as much as possible about the target. For example:

All information found can be used for an actual attack.

A buffer is a temporary area for data storage. In operating systems, applications, and in hardware we use buffers. When data is stored within the buffer boundaries, everything works as it should. A buffer overflow occurs when a process tries to write more data to the buffer than the buffer can hold.

When data overflows outside of the buffer space, data can get stored in adjacent memory locations, overwriting data in those locations.

An attacker could cause a service or system to crash, or include malicious code and attempt to run it.

Developers can prevent buffer overflows from happening by fixing their code or using programming languages with built-in protection.

Malware is a catch-all term for all malicious software designed to access systems, and cause damage, and disruptions. Malware comes in many forms:

Viruses and worms are types of malware. These are malicious software programs that can replicate from one system to another. Viruses are usually attached to executable files. Once the target opens the file, the virus infects the computer and attempts to spread through the network, infected email attachments, removable drives, etc. The difference between a virus and a worm, is that a worm is standalone software that usually replicates itself by infecting systems with vulnerabilities.

Ransomware encrypts files and folders on your computer and notifies the victim that the decryption key can be purchased to unlock the data.

Trojans are malicious programs designed to mislead users. This could be a program that you install that also includes malicious code. It could be a USB stick that executes code when you insert it into your computer. Unlike viruses or worms, trojans don’t replicate themselves.

Spyware is malware that is installed on your computer with or without your permission. Spyware collects information about the user, computer usage, browsing habits, etc. This information is forwarded to an external location.

The attacks we looked at so far are about attacks against systems. There are also attacks that exploit weaknesses in humans who use the systems that the attacker is interested in.

Social engineering is about exploiting trust and social behavior. When an attacker contacts a user and claims to be from the company’s helpdesk, asking for something, the user might feel obliged to comply with the request. Social engineering is used in some of the attacks described below.

With a phishing attack, the attacker tries to lure victims into sharing confidential information (passwords, credit card numbers, etc.) with the attacker. There are many different ways to do this:

There are two variations when it comes to phishing:

With pharming, the attacker uses techniques like DNS hijacking, DNS cache poisoning, or DNS spoofing to redirect users to a fake website that mimics the appearance of the legitimate website. This can be difficult to spot when the domain name matches and the website looks legitimate. Just like with phishing, the attacker will attempt to obtain confidential information from users.

When you want to access a network, application, or server it’s likely that you need some form of authentication. The most common option is a username and password. The username could be easy to guess. Perhaps it’s a default username like root or admin. It could also be the name of a real user.

To mitigate password attacks, we have different options. You could implement password policies where you require complex passwords. Passwords should include:

The idea is to make passwords complex enough so that dictionary or brute attacks won’t be able to crack the password. Passwords should also be changed multiple times per year. The disadvantage of complex passwords is that it makes passwords difficult to remember for your users. Users might write down their passwords so they don’t forget them.

Many websites promote the usage of multi-factor authentication.

Certificates have an expiration date and can be revoked before they expire. This is useful when a user leaves the company or a device gets stolen.

This is a common form of authentication nowadays. Many smartphones have a fingerprint scanner or use face recognition.

You have now learned about different attacks, vulnerabilities, and countermeasures. I hope you enjoyed this lesson.