There are many different methods you can use to authenticate wireless clients. Some of these methods are outdated and have security weaknesses. They have been replaced with newer, more secure authentication methods.

In this lesson, we’ll discuss the most common authentication methods. 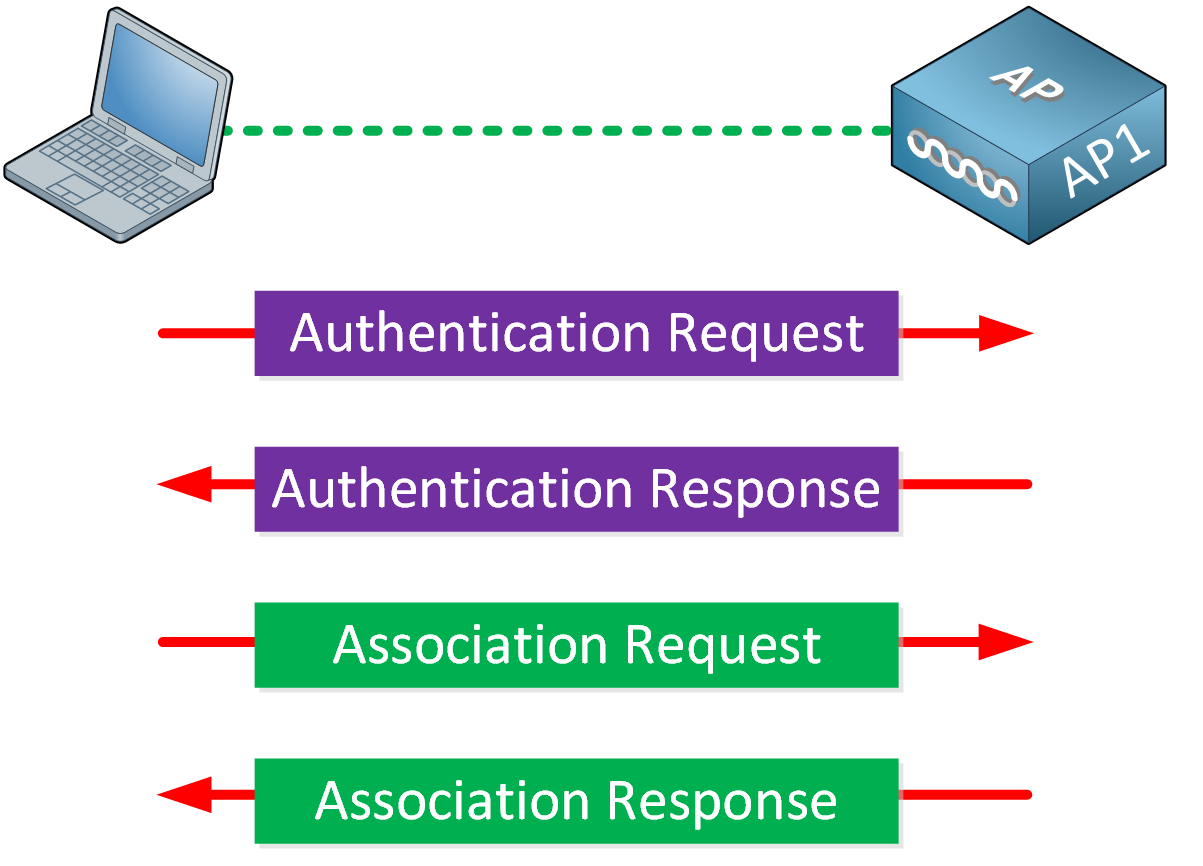 Using open authentication doesn’t automatically mean that there is no authentication at all. You can still authenticate wireless users on another level. If you have ever used a public wireless network at an airport, hotel, or fast food restaurant, you know what I’m talking about.

Wired Equivalent Privacy (WEP) is a security algorithm and the second authentication option that the first 802.11 standard supports. The idea behind WEP is to make a wireless network as secure as a wired link. WEP uses the RC4 cipher algorithm to encrypt every frame so that eavesdroppers can’t read the contents.

The algorithm uses a WEP key to create other encryption keys, one for each wireless frame. When the sender and receiver use the same WEP key, they can decrypt each other’s frames.

WEP keys are 64 or 128 bits and represented with a string of 10 or 26 hex digits. The longer the key, the more unique bits, which results in stronger encryption.

Unfortunately, WEP is a broken protocol. The original 802.11 standard is from 1999. Researchers discovered some weaknesses in 2001, which make it very easy to decrypt any WEP encrypted traffic and to retrieve the pre-shared key.

An 802.1X-enabled port limits access to the network until the client successfully authenticates. For wireless networks, it means that a wireless client can associate with an AP, but it won’t be able to do anything else until authentication succeeds.

There are three device roles:

Now you understand the basics of 802.1X/EAP, let’s take a look at some popular EAP authentication methods.

One of the issues with LEAP is that it uses a modified version of MS-CHAP, a weak authentication protocol. It’s vulnerable to an offline attack if you use weak passwords. Users should use strong passwords, which doesn’t often happen because those are difficult to remember.

You can still configure LEAP, but you shouldn’t use it anymore. There are more secure EAP options.

To make EAP-FAST work, you need a RADIUS server. However, the RADIUS server also needs to act as an EAP-FAST server because it needs to generate PACs. If you already have Cisco Secure Access (ACS) or Identity Services Engine (ISE) in your network, EAP-FAST might be an option.

If the wireless client accepts the digital certificate, the supplicant and authentication server build the TLS tunnel. We can authenticate the end user through the TLS tunnel using multiple protocols, including MS-CHAPv2.

PEAP is a popular method for wireless authentication. You only need a certificate for the authentication server, not on the wireless clients. This makes it quite easy to implement PEAP.

100% Satisfaction Guaranteed!
You may cancel your monthly membership at any time.
No Questions Asked!
Previous Lesson
Introduction to Wireless Security
Next Lesson
Wireless Encryption and Integrity