Cloud computing is an approach where everything is delivered as a service by cloud providers or the IT department of your company. Cloud is used a lot as a marketing buzzword, in this lesson, I’ll explain what cloud computing is about. To do so, we have to start with a short story about physical servers, server virtualization and what a typical IT workflow looks like.

Before server virtualization, you would only see bare metal servers. A bare metal server is a physical server that runs a single operating system like Microsoft Windows Server or Linux. This is from a time where CPUs only had 1-2 cores and not a lot a RAM.

Servers are similar to your computer at home, the main difference is that they are built to run 24/7 and usually have more reliable hardware. Some have redundant power supplies, hard disks, etc.

They come in different forms and shapes, the tower servers are often used in office buildings: 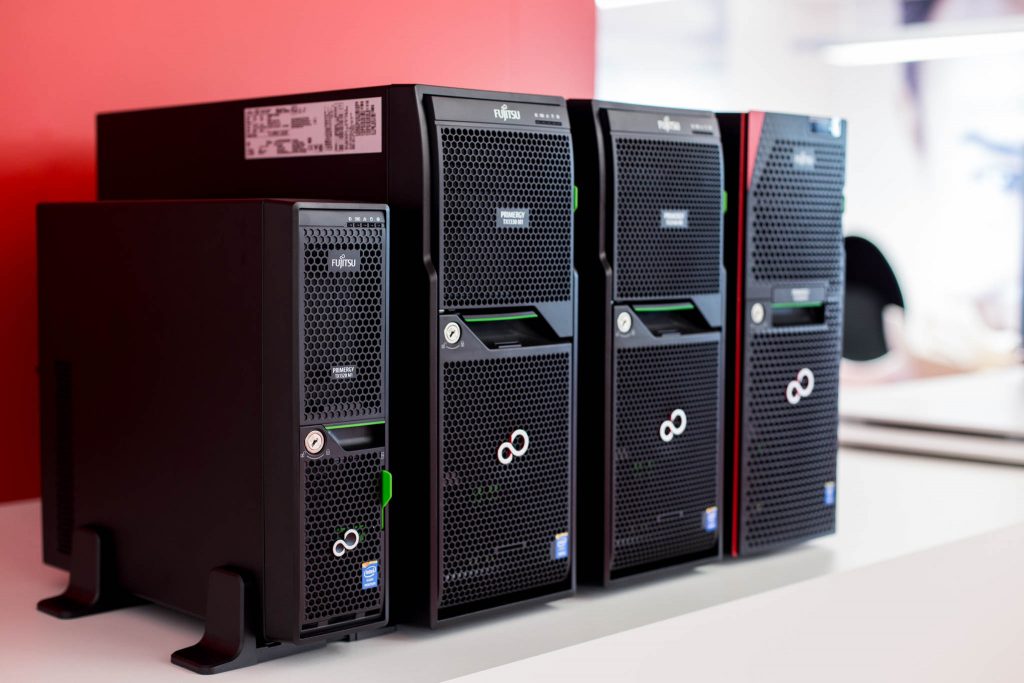 The bare metal server has a single operating system and can be used for one or multiple applications. For example, for small businesses, Microsoft Small Business Server has always been a popular office solution. It runs on 1 or 2 physical servers and offers:

In enterprise environments, it’s more common to see that a physical server is used for each “role”. One web server, one DNS server, etc.

In data centers, physical space is expensive so it’s more common to see rack servers there: Here’s an example of an HP Proliant rack server in a rack cabinet: 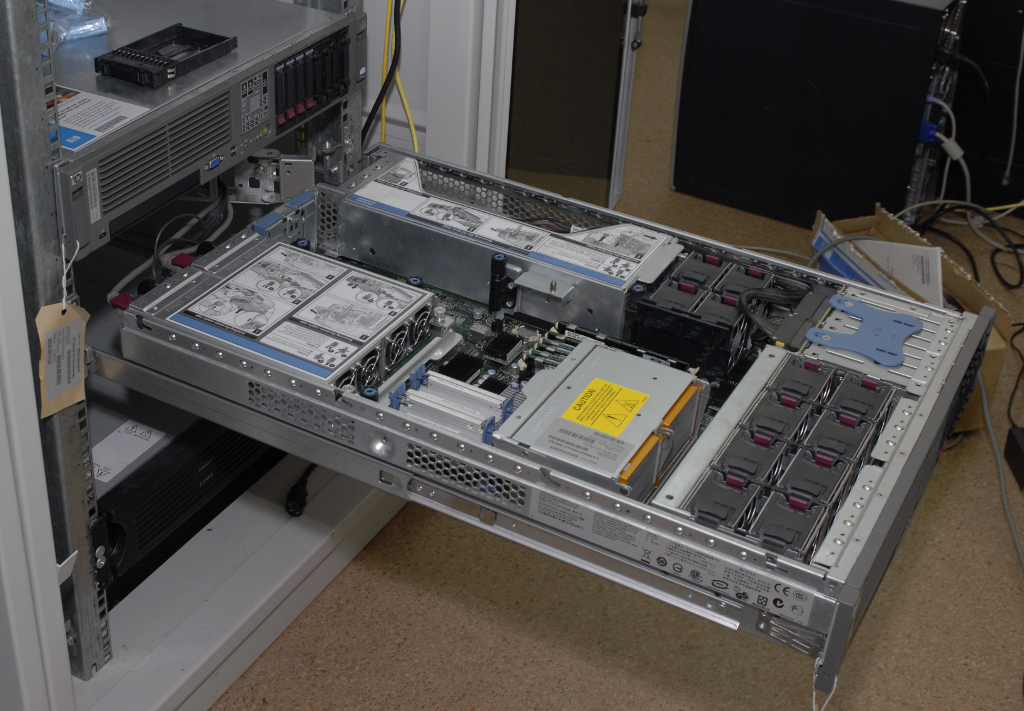 Later, blade servers were introduced that offer even more computing power / memory and use less space:

Above you see a blade enclosure that fits in a server rack. It offers networking, power, and cooling. The blade servers have CPUs, memory, and storage. They fit in the slots of the blade enclosure.

When you buy a physical server, you have to think of the required resources. How much memory does the server need? How much disk space? How fast should the CPUs be? etc. You also have to take future growth into account.

In the last decade, the number of cores in a single processor has grown rapidly. We went from single core processors to dual core processors, quad core processors and now there are even processors with more than 10-20 cores. There is a also a technique called hyperthreading where we have two virtual cores for each physical core. This allows the operating system to execute two threads at the same time. Here is an example of an Intel I7 processor: 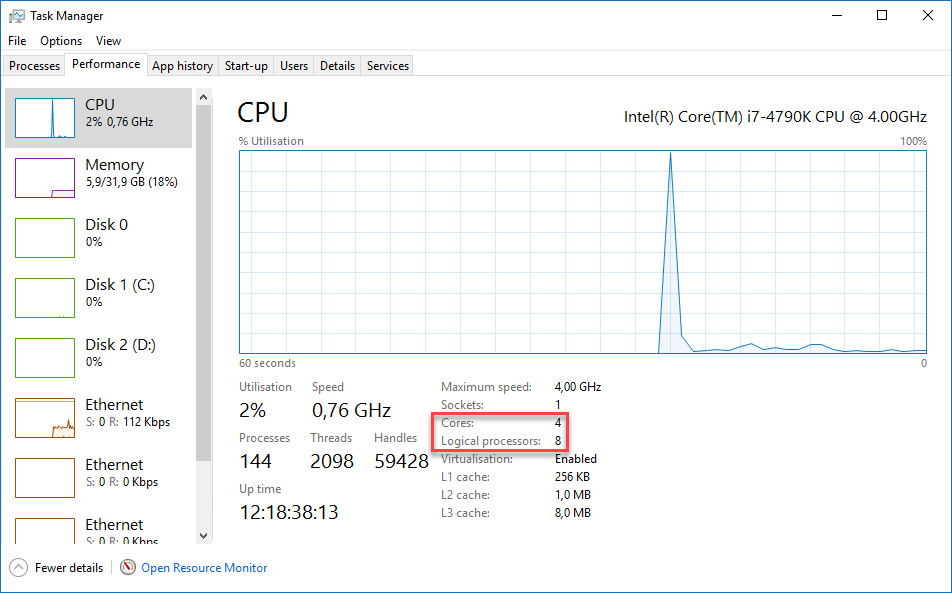 Above you can see that this CPU has 4 physical cores and 8 virtual (logical) cores.

Here’s an image of what a bare metal server looks like that runs a single operating system:

Above you can see we have the hardware that runs an operating system and an application. Here’s what it looks like when we go virtual: 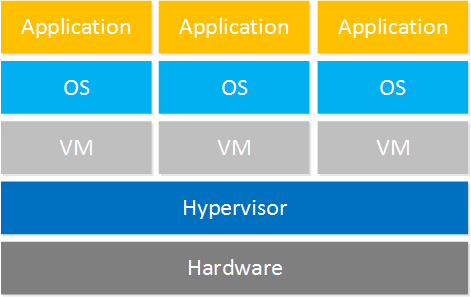 Here are some companies/products that offer server virtualization solutions:

Physical servers have one or more NICs (Network interface card) that are connected to a network switch. What about virtual servers? Virtual machines have virtualized hardware and that includes their NICs, which we call vNIC (Virtual NICs). Somehow we have to connect these vNICs to our network, this is done with a virtual switch. Take a look at this example: 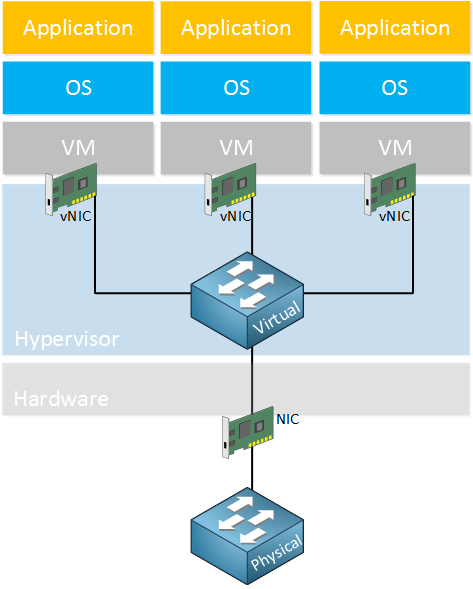 In the picture above there is only one physical NIC. In production networks, we usually use two or more physical NICs for redundancy and to make sure there is enough bandwidth for all virtual NICs.

The virtual switch is supplied by the hypervisor vendor or you can use an external virtual switch product like the Cisco Nexus 1000v switch. This allows you to use the same switch features on your virtual switch as you use on your physical switches.

We just talked about how virtual machines are connected to a physical switch through a virtual switch. Let’s zoom out a bit…what does it look like in a real data center network where we have racks full of servers? There are two common options, let’s take a look at both.

The top of rack designs has network switches at the top of each server cabinet / rack. The servers are located below the ToR switches and for redundancy reasons, connected to both ToR switches: 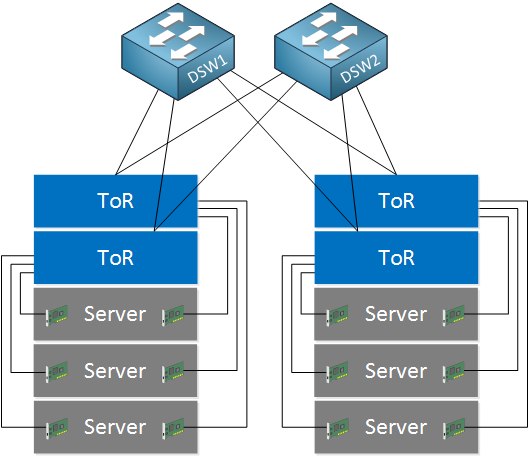 With the end of row design, there are no switches in the racks and all servers are directly connected to EoR (End of Row) switches that are located in a separate rack: 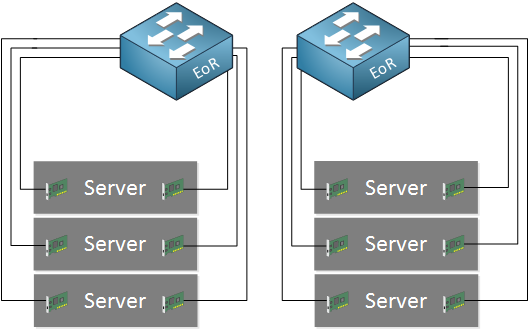 Some of the advantages of this setup is that you don’t need as many switches, there are less unused switch ports so overall port utilization is better. One of the disadvantages is that you need a lot of cabling from your server racks to the racks where the EoR switches are located.

We talked about physical servers, virtualization and a bit of how these virtual / physical servers are connected in a data center. One of the things that hasn’t changed much throughout the years is the workflow. Let me give you an example.

Let’s say we have an enterprise company with thousands of users. They have their own data center with racks full of servers and hundreds of virtual machines.

This company has different departments, including one with developers that work on a new web application. One of the developers wants to test his/her applications and requires a web server. The workflow typically looks like this:

The workflow described above is how it’s been for a long time and it works. The “problem” however, is that it quite a slow process.

There is always a human in between (the IT department) that has to do some work to offer the “service” to the customer (the developer) is looking for.

The idea behind cloud computing is that we offer different services, a customer should be able to request the service and receive the service right away. There is no human in between that has to look at the customer’s request, process it and report back. Everything is automated.

Instead of buying a product, we pay for a service. When we talk about cloud computing, we use the “as a service” terminology a lot. These three are the most common:

Let me walk you through them and give you some examples of each.

IaaS (Infrastructure as a service)

Let me give you an example of how Amazon AWS offers virtual machines to its customers. When you create a new virtual machine, you can choose which operating system you want to use: 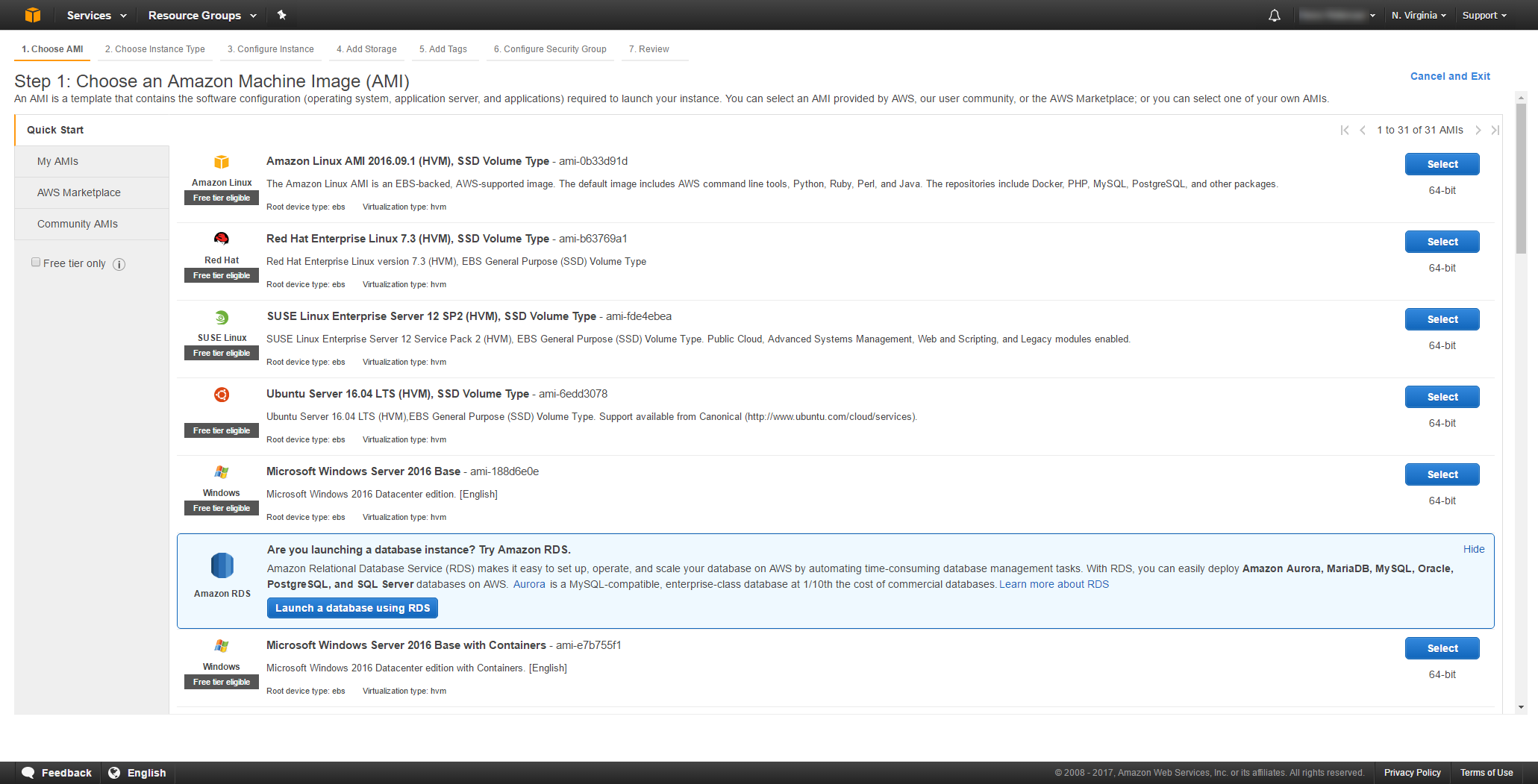 Once you have decided which operating system to use, you can choose an instance type with a certain number of CPU cores, an X amount of memory, storage and network performance: 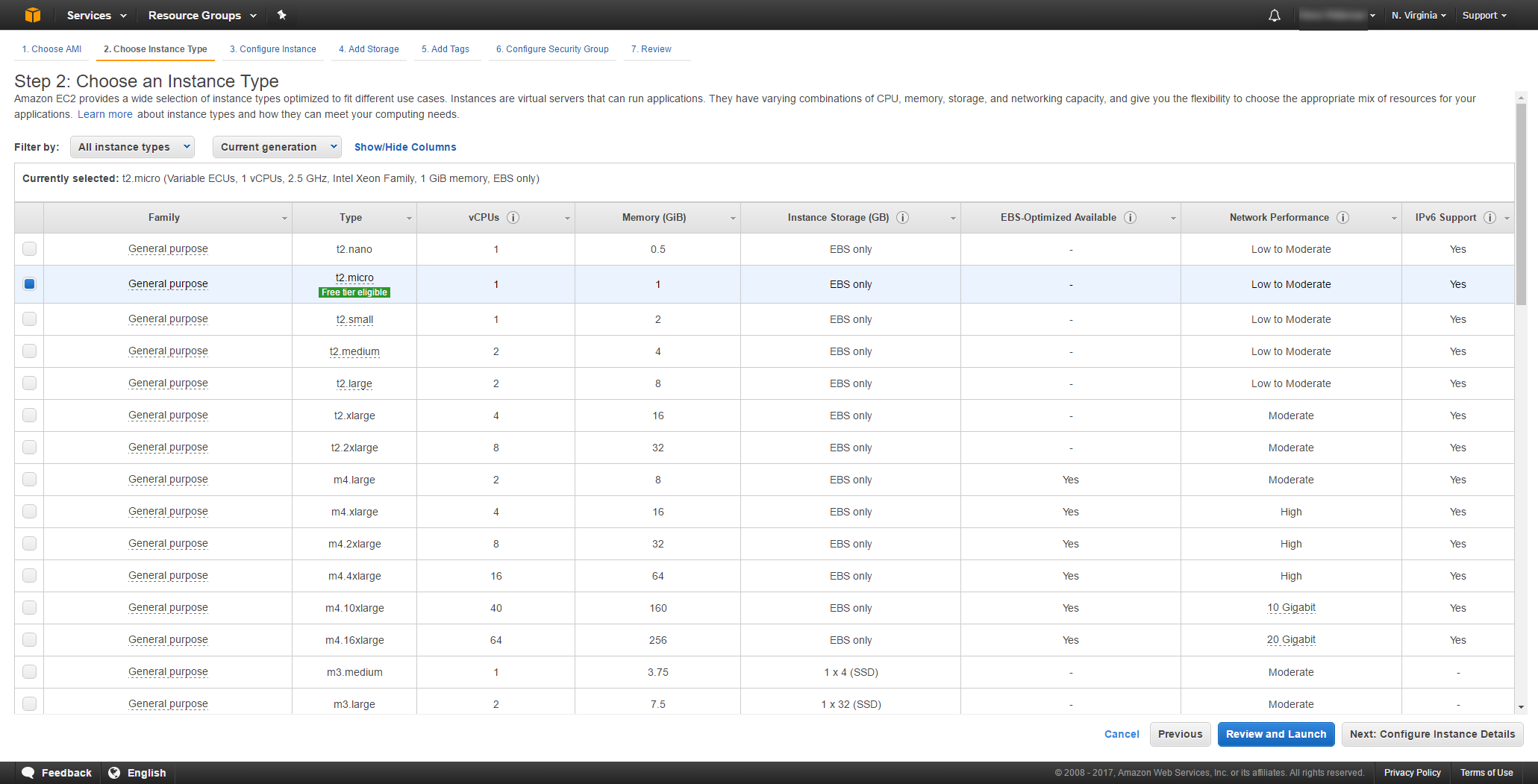 Within a few minutes, your new virtual machine will be up and running. Don’t need it anymore? It’s billed per hour and you can delete it whenever you want.

PaaS (Platform as a Service)

Let’s say you are a developer who is working on a new web application. Your application has some server requirements.

As a developer, you care about your writing your application and you really don’t want to be bothered with the details of virtual machines, installing software, etc.

Instead, you can use a PaaS solution like Amazon AWS Beanstalk. This is a virtual machine with a preinstalled OS and all software required to run your application: 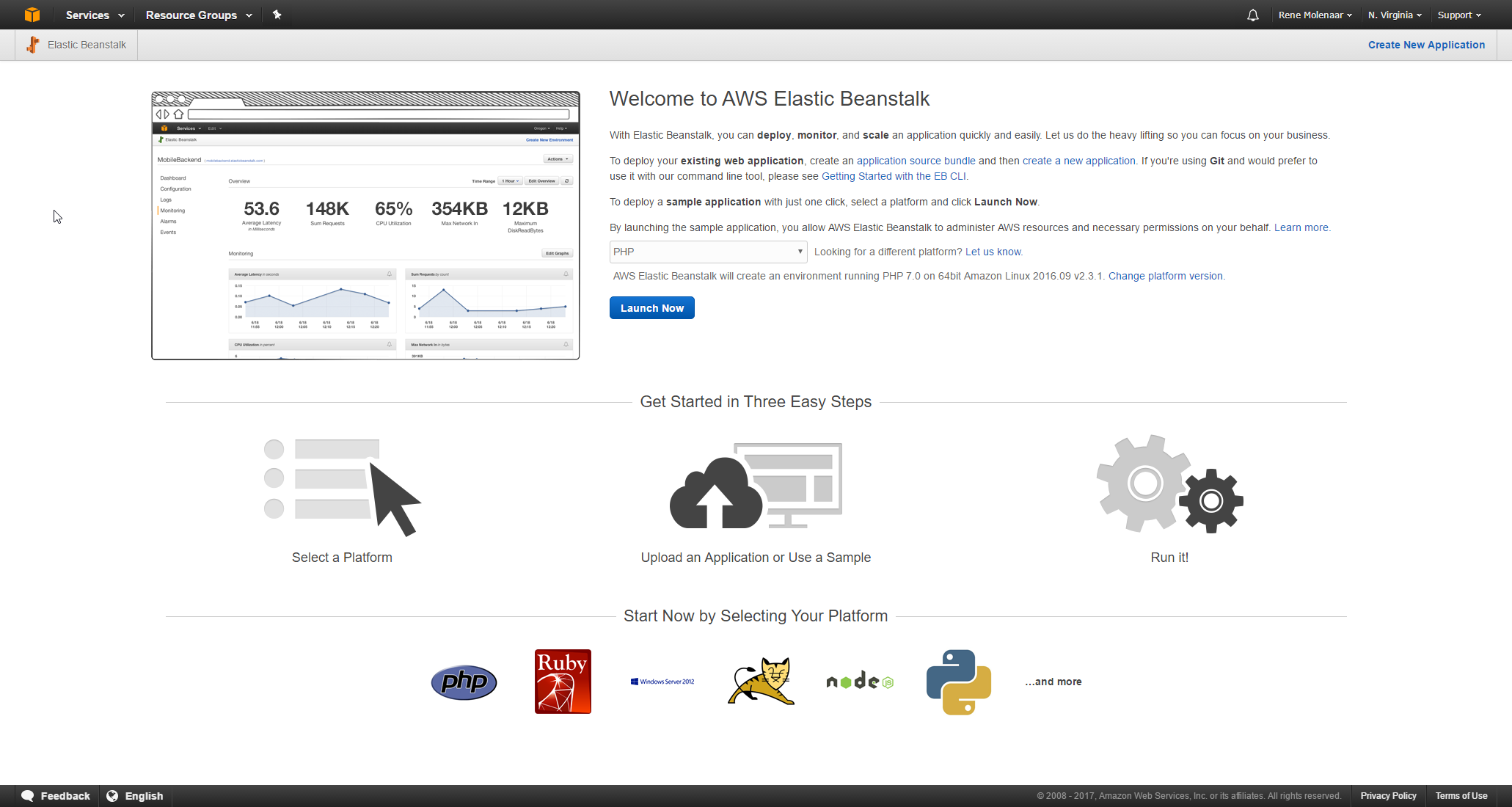 The only thing you have to do is upload your application and run it. Another example is Google’s App Engine: 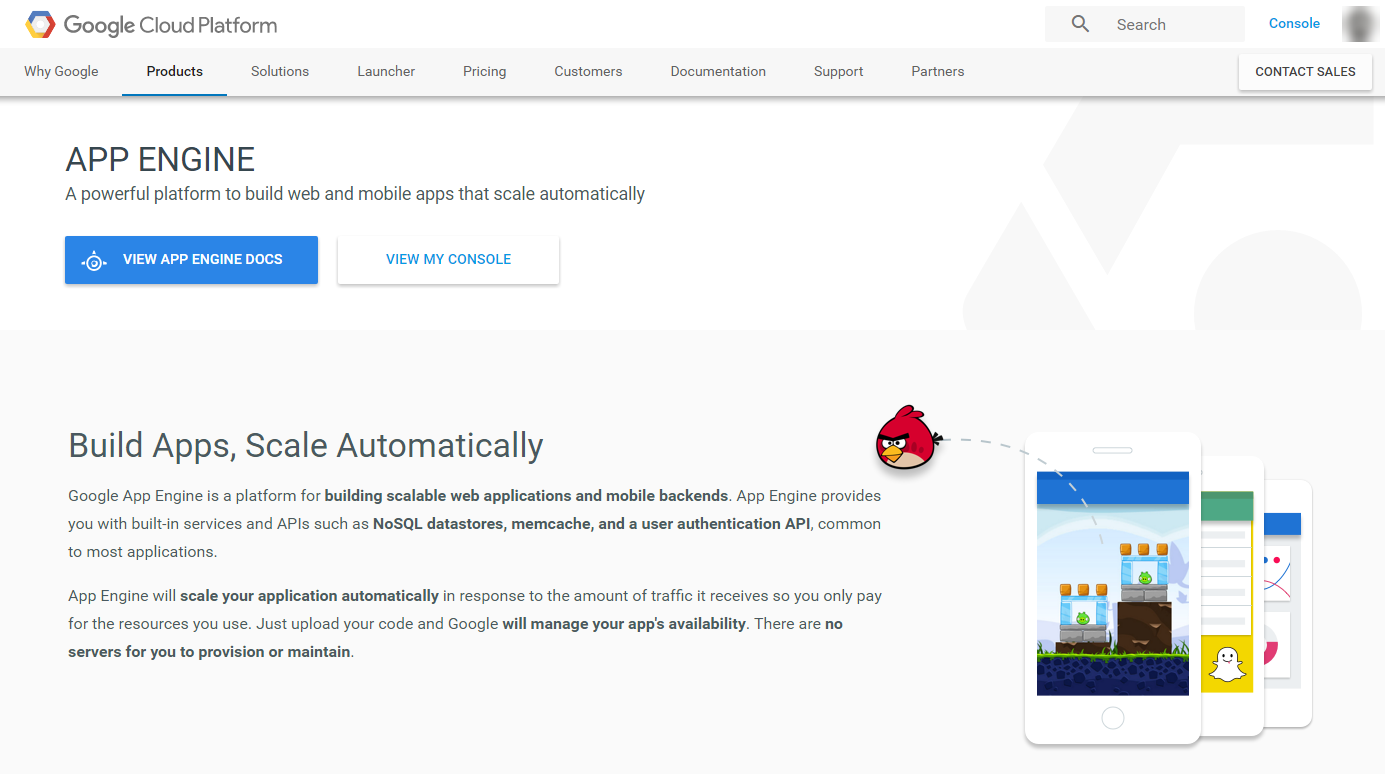 Google App Engine lets you develop and host apps, they take care of the underlying infrastructure for you. The only thing you have to do is create your app and upload it.

SaaS (Software as a Service)

Saas (Software as a Service) means the customer signs up for an application and can use it right away, without having to install anything. Even though this term might be new, we have all been using this for years. Some examples:

With SaaS, you pay for the application and the cloud provider takes care of installation, maintaining the virtual servers etc.

The services I showed you above are all offered by a cloud provider, we call this the public cloud.  The largest cloud providers are:

Amazon AWS is by far the largest cloud provider at the moment, Here’s an overview with the services they offer, it’s quite a big list: 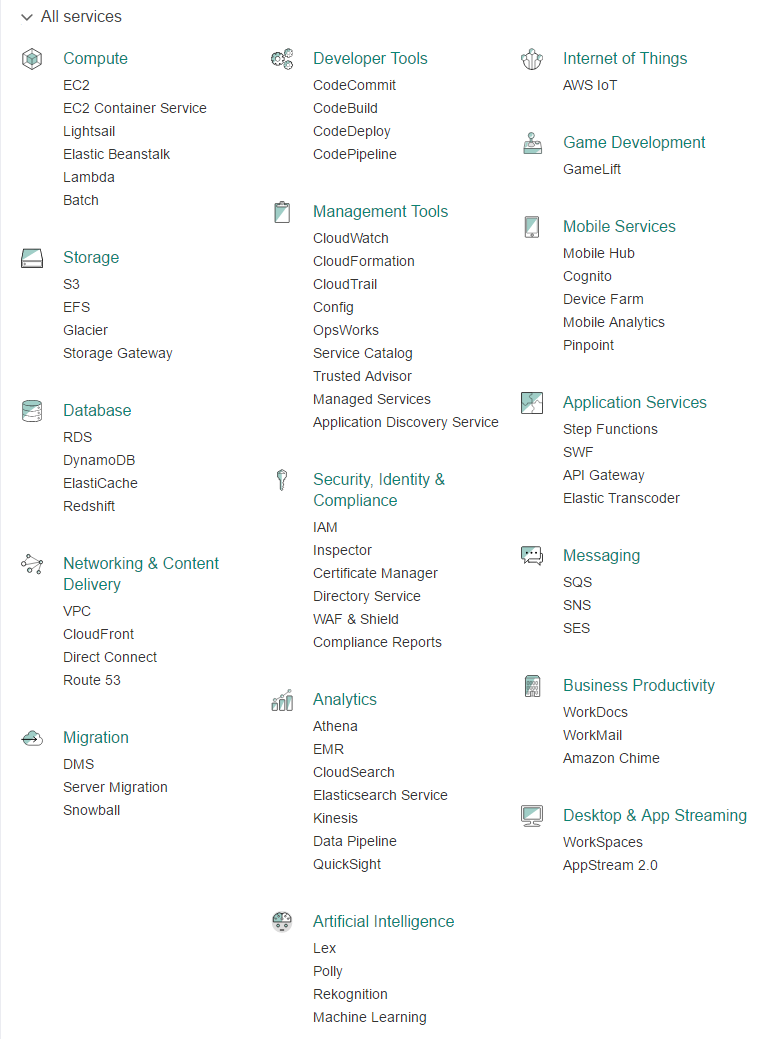 It’s no coincidence that most of my screenshots are from Amazon AWS. It is the largest cloud provider by far and networklessons.com also runs on Amazon AWS.

Remember the story about workflow where the IT department manually creates new virtual machines and installs new software when requested? With a private cloud, a company changes their workflow so that they operate in a similar was as the public cloud providers.

The IT department will create a service catalog that lists all services that they can offer to their users. Behind the scenes, everything is automated so that when a user requests a service, it is provisioned automatically.

Next time one of the company users need something. He or she can click on a few buttons and a new virtual machine with the required software is launched.

You now have an idea what the cloud is about, let’s take a closer look at some of the different options of how we can connect to the cloud.

Using the Internet to connect to the cloud is a common option. There are some advantages and disadvantages, however. Let’s look at an example of an enterprise network that uses the services of a cloud provider:

The advantages of using the Internet as your WAN connection to the cloud are:

Some of the disadvantages:

Most cloud providers also support IPsec VPN, allowing you to create a site-to-site VPN tunnel between your Enterprise network and the Cloud provider.

An alternative connection method is the private WAN. This is a dedicated connection from your site to the cloud provider.

Here are some examples of private WAN connections:

What if you require some specific features on your router? Perhaps you use DMVPN in your network and you also need this at the cloud provider. Perhaps you have some specific firewall features that you would like to use. The cloud provider might not offer this directly, but it is possible to use VNFs (Virtual Network Function). A VNF is the virtual version of your favorite router, firewall or other network devices. Here are two examples:

You can add them to your cloud network if needed:

This will give you the same networking features at the cloud provider network as those that you use on your own enterprise network.

You have now learned some of the basics of cloud computing: