TCP (Transmission Control Protocol) is a connection oriented protocol which means that we keep track of how much data has been transmitted. The sender will transmit some data and the receiver has to acknowledge it. When we don’t receive the acknowledgment in time then the sender will re-transmit the data.

TCP uses “windowing” which means that a sender will send one or more data segments and the receiver will acknowledge one or all segments. When we start a TCP connection, the hosts will use a receive buffer where we temporarily store data before the application can process it.

Typically the TCP connection will start with a small window size and every time when there is a successful acknowledgement, the window size will increase. Here’s an example:

The host on the left side is now sending two segments and the host on the right side will return a single acknowledgment. Everything is working fine so the window size will increase even further: 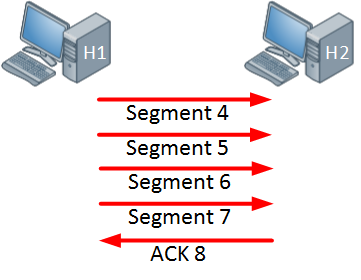 The host is now sending four segments and the host on the right side responds with a single acknowledgment.

When an interface has congestion then it’s possible that IP packets are dropped. To deal with this, TCP has a number of algorithms that deal with congestion control. One of them is called slow start.

Congestion occurs when the interface has to transmit more data than it can handle. It’s queue(s) will hit a limit and packets will be dropped.

The interface then gets congested again, the window size drops back to one and the story repeats itself. The result of this is that we don’t use all the available bandwidth that our interface has to offer. If you look at the dashed line you can see that we the average interface utilization isn’t very high.

To prevent global synchronization we can use RED (Random Early Detection). this is a feature that drops “random” packets from TCP flows based on the number of packets in a queue and the TOS (Type of Service) marking of the packets. When packets are dropped before a queue is full, we can avoid the global synchronization.

The end result will look similar to this:

When we use RED, our average interface utilization will improve.

Now you have an idea what the TCP window size is about, let’s take a look at a real example of how the window size is used. We can use wireshark for this.

To examine the TCP window size I will use two devices:

Here’s what happened, take a look at this picture: 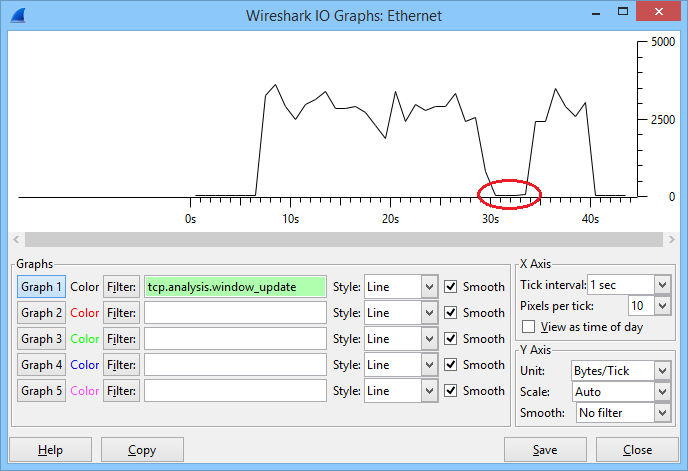 After a few packets, the window size of the raspberry pi looks like this: 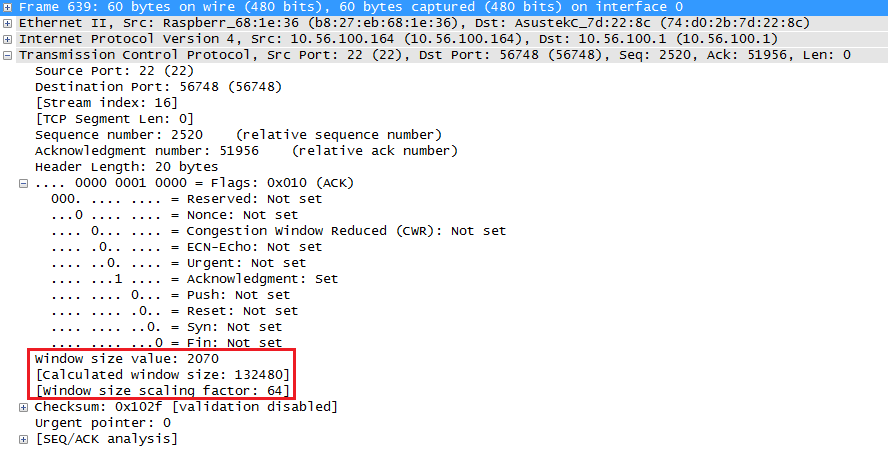 At around the 10 second mark the window size decreased. Here’s what happened:

The raspberry pi seems to have trouble keeping up and its receive buffer is probably full. It tells the computer to use a window size of 26752 from now on. The computer sends 18 segments with 1460 bytes and one segment of 472 bytes (26752 bytes in total). The last packet shows us “TCP Window Full” message. This is something that wireshark reports to us, our computer has completely filled the receive buffer of the raspberry pi.

Once the raspberry pi has caught up a bit and around the 30 second mark, something bad happens. Take a look at the wireshark capture below:

Above you can see that the raspberry pi sends an ACK to the computer with a window size of 0. This means that the window size will remain at 0 for a specified amount of time, the raspberry pi is unable to receive any more data at this moment and the TCP transmission will be paused for awhile while the receive buffer is processed. 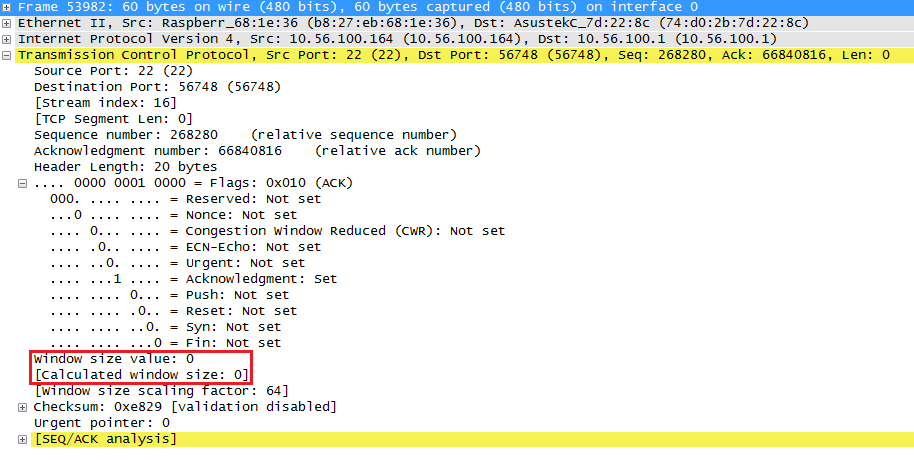 Above you can see that the window size is now 0. Once the receive buffer has been processed, the raspberry pi will send an ACK with a new window size: 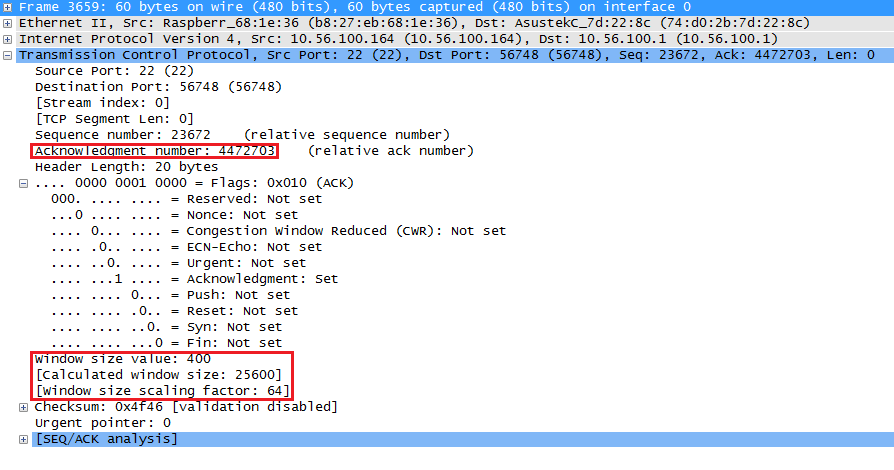 The window size is now only 25600 bytes but will grow again. The rest of the transmission went without any hiccups and the file transfer completed.

You have now seen how TCP uses the window size to tell the sender how much data to transmit before it will receive an acknowledgment. I also showed you an example of how the window size is used when the receiver is unable to process its receive buffer in time.

UDP, unlike TCP is a connectionless protocol and will just keep sending traffic. There is no window size, for this reason you might want to limit your UDP traffic or you might see starvation of your TCP traffic when there is congestion.

I hope you have enjoyed this lesson, if you have any more questions feel free to leave a comment in our forum.

73 more replies! Ask a question or join the discussion by visiting our Community Forum