In networking, a broadcast means that we send something that everyone receives, whether they need/want it or not. Switches will forward broadcast traffic on all their interfaces, except the one they received the broadcast on. Here’s an illustration to visualize this:

H2 on the left side sends a broadcast which is forwarded to all other switches and computers. There are a number of applications and protocols that use broadcast traffic. A good example is ARP (Address Resolution Protocol). Switches will recognize it as broadcast traffic by looking at the destination MAC address. Here’s an example of an ARP request:

Switches will also broadcast Ethernet frames if they haven’t learned the destination MAC address yet.

A broadcast domain is a collection of network devices that receive broadcast traffic from each other. For example, here’s our network with three switches again:

Broadcast traffic is not very efficient. For example, let’s say that that ARP request is sent by H2 to figure out the MAC address of H1. The information in the ARP request is useless for SW2, SW3, and H3 but they do receive it. SW2 and SW3 have to waste bandwidth forwarding the broadcast frame and H3 has to waste some CPU cycles to look at an ARP request that it doesn’t care about.

How do we create multiple broadcast domains? One way to do this is by adding a router to your network:

Routers, unlike switches, do not forward broadcast traffic. When H2 sends that broadcast frame, it will be forwarded by SW2 to R1 but that’s it. This does mean that traffic from H2 to H1 will have to be routed but that’s another story. Here are the broadcast domains we have now:

We now have three broadcast domains, one on each side of the router.

Is there any option to create multiple broadcast domains on a switch? There sure is, it can be done with VLANs (Virtual LAN).

We will take a closer look at VLANs in another lesson but for now, keep in mind that it’s a possibility: 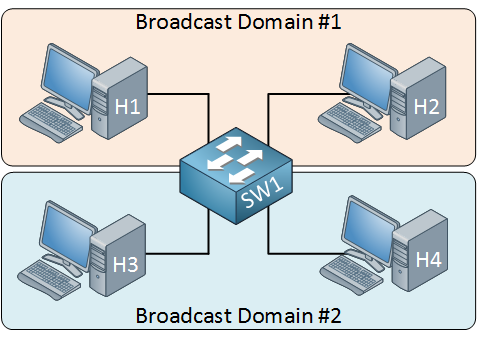 You have learned what a broadcast domain is: