NTP (Network Time Protocol) is used to allow network devices to synchronize their clocks with a central source clock. For network devices like routers, switches or firewalls this is very important because we want to make sure that logging information and timestamps have the accurate time and date. If you ever have network issues or get hacked, you want to make sure you know exactly what and when it happened.

Normally a router or switch will run in NTP client mode which means that it will adjust its clock based on the time of a NTP server. Basically the NTP protocol describes the algorithm that the NTP clients use to synchronize their clocks with the NTP server and the packets that are used between them.

A good example of a NTP server is ntp.pool.org. This is a cluster of NTP servers that many servers and network devices use to synchronize their clocks.

NTP uses a concept called “stratum” that defines how many NTP hops away a device is from an authorative time source. For example, a device with stratum 1 is a very accurate device and might have an atomic clock attached to it. Another NTP server that is using this stratum 1 server to sync its own time would be a stratum 2 device because it’s one NTP hop further away from the source. When you configure multiple NTP servers, the client will prefer the NTP server with the lowest stratum value.

Cisco routers and switches can use 3 different NTP modes:

The symmetric active mode is used between NTP devices to synchronize with each other, it’s used as a backup mechanism when they are unable to reach the (external) NTP server.

In the remaining of this lesson, I will demonstrate how to configure NTP on a Cisco router and switches.

This is the topology I will use: 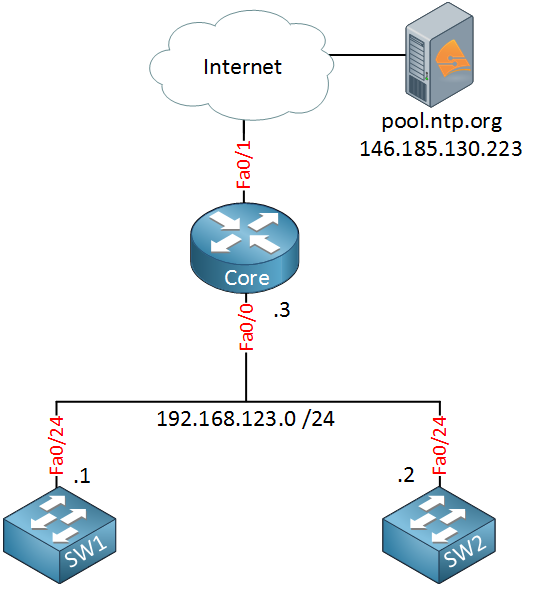 The router on the top is called “CoreRouter” and its the edge of my network. It is connected to the Internet and will use one of the NTP servers from pool.ntp.org to synchronize its clock. The network also has two internal switches that require synchronized clocks. Both switches will become NTP clients of the CoreRouter, thus making the CoreRouter a NTP server.

First we will configure the CoreRouter on top. I will use pool.ntp.org as the external NTP server for this example. We need to make sure that the router is able to resolve hostnames:

I will use Google DNS for this. Our next step is to configure the NTP server:

That was easy enough, just one command and we will synchronize our clock with the public server. We can verify our work like this:

There is one more command that gives us more information about the NTP configuration:

The router tells us that we are unsynchronized and that there is no reference clock…we will just wait a couple of minutes and take a look at these commands again:

A few minutes later and the output has changed. The * in front of the IP address tells us that we have synchronized and the stratum is 2…that means that this NTP server is pretty close to a reliable time source. The “poll” field tells us that we will try to synchronize the time every 64 seconds. Let’s check the other command that we just saw:

Our clock has been synchronized and our own stratum is 3, that makes sense since the public stratum server has a stratum of 2 and we are one “hop” away from it.

NTP synchronization can be very slow so you have to be patient when your clocks are not synchronized. One way to speed it up a bit is to adjust your clock manually so it is closer to the current time.

Cisco routers have two different clocks, they have a software clock and a hardware clock and they operate separately from each other. Here’s how to see both clocks:

The show clock command shows me the software clock while the show calendar command gives me the hardware clock. The two clocks are not in sync so this is something we should fix, you can do it like this:

The ntp update-calendar command will update the hardware clock with the time of the software clock, here’s the result:

That’s all I wanted to configure on the CoreRouter for now. We still have to configure two switches to synchronize their clocks.

Once again it might take a few minutes to synchronize but this is what you will see:

The clock of SW1 has been synchronized and its stratum is 4. This makes sense since it’s one “hop” further away from its NTP server (CoreRouter). Let’s do the same for SW2:

Let’s be patient for a few more minutes and this is what we’ll get:

SW1 and SW2 are now using CoreRouter to synchronize their clocks. Let’s also configure them to use each other for synchronization. This is the symmetric active mode I mentioned before, basically the two switches will “help” each other to synchronize…this might be useful in case the CoreRouter fails some day:

After waiting a few minutes you’ll see that SW1 and SW2 have synchronized with each other:

Great everything is now in sync.

Are we done? Not quite yet…there are a few more things we can do with NTP. The CoreRouter and the two switches use unicast (UDP port 123) for synchronization but you can also use multicast or broadcast. Let me give you an example…

If you have more than 20 network devices or a router that has limited system memory or CPU resources you might want to consider using NTP broadcast or multicast as it requires less resources. We can enable multicast or broadcast on the interface level.To demonstrate this I will add two routers below SW1 and SW2 that will synchronize themselves using multicast or broadcast. This is what it looks like: 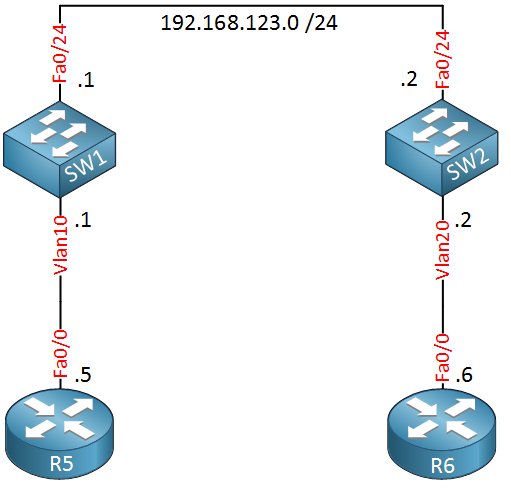 I’ll configure SW1 to use multicast address 239.1.1.1 and SW2 will send NTP updates through broadcast:

100% Satisfaction Guaranteed!
You may cancel your monthly membership at any time.
No Questions Asked!
Previous Lesson
Syslog
Next Lesson
Cisco NetFlow

84 more replies! Ask a question or join the discussion by visiting our Community Forum