In this lesson we’ll take a look how to configure an IPsec IKEv2 tunnel between a Cisco ASA Firewall and a Linux strongSwan server.

strongSwan is an IPsec VPN implementation on Linux which supports IKEv1 and IKEv2 and some EAP/mobility extensions. It’s well documented, maintained and supports Linux kernels 3.x and later.

For this example I’m using a Ubuntu 14.04 LTS server. Here’s the topology: 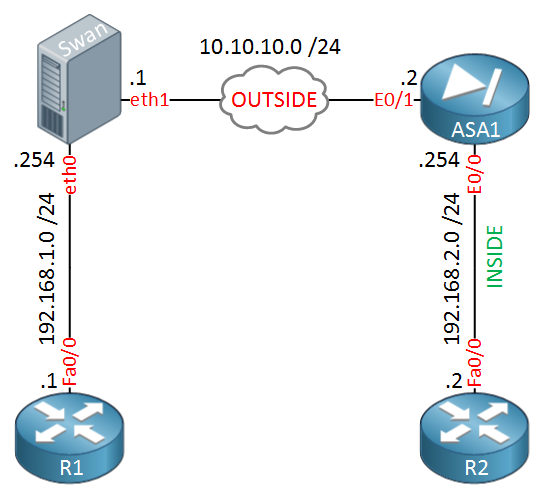 Above we have a small network with 4 devices. On the left side we have our strongSwan server, on the other side a Cisco ASA firewall. I’m using two routers called R1 and R2 as “hosts” so we have something to test the VPN. Let’s start with the strongSwan configuration!

strongSwan is in the default Ubuntu repositories so installing it is very simple. Just use apt-get to fetch and install it:

The main configuration is done in the ipsec.conf file. Open your favorite text editor and edit it:

Let’s discuss these parameters so you know what we are dealing with. The first two items (strictcrlpolicy and uniqueids) are uncommented by default and we don’t have to worry about these.  The first parameters are under the %default connection which means they apply to all connections unless overruled by a specific connection profile.

Now for our site-to-site VPN with the Cisco ASA Firewall we have another connection profile called “ciscoasa” with some more specific parameters:

This completes the connection profile but we still have to configure the pre-shared keys. This is done in the ipsec.secrets file. Open your text editor:

IKEv2 allows us to use a different pre-shared key for each peer, to keep it simple we’ll use the same key on both sides. Add this to the ipsec.secrets file:

This completes the IPsec configuration. There’s still one thing left to do…by default, Ubuntu (or most Linux distributions) will not act as a router…it won’t forward IP packets from one interface to another. To enable this you have to use the following command:

Forwarding is now activated. If you want to enable this at boot then you should add it to the sysctl.conf file. You can do it like this:

Everything is now in place for strongSwan. Let’s start the IPsec daemon:

Now we can work on the Cisco ASA…

In a previous lesson I covered the configuration of IKEv2 IPsec VPN between two Cisco ASA firewalls so I won’t explain all commands one by one again. First we’ll configure the interfaces:

Now we can configure the VPN settings. Let’s start with the IKEv2 policy: