The Cisco ASA firewall uses access-lists that are similar to the ones on IOS routers and switches. If you have no idea how access-lists work then it’s best to read my introduction to access-lists first.

Access-lists are created globally and then applied with the access-group command. They can be applied in- or outbound.

There are a couple of things you should know about access-lists on the ASA:

Let’s take a look at some examples how we can use access-lists. I’ll be using this topology: 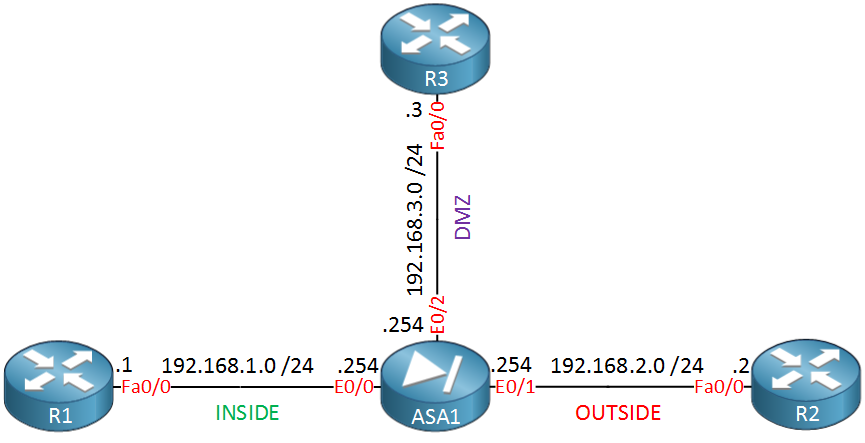 We have three devices, R1 on the inside, R2 on the outside and R3 in the DMZ. This means that by default the following traffic is allowed:

Let’s look at an example first where we restrict traffic from the inside as by default, all traffic is allowed.

Deny Traffic from Inside

To test this I will enable HTTP server on R2 so that we have something to connect to from R1:

This traffic is allowed by default, let’s create an access-list that restricts HTTP traffic. We’ll create something so that users on the inside are not allowed to connect to the HTTP server on R2. All other traffic will be permitted:

The access-list above will do the job.

Since ASA version 9.x, the “any” keyword applies to both IPv4 and IPv6 traffic. If you only want to match IPv4 traffic then you should “any4”. For IPv6 traffic, use “any6”.

The access-group command enables the access-list called “INSIDE_INBOUND” inbound on the “INSIDE” interface. Let’s see if we can still reach the HTTP server on R2:

This is no longer working, take a look on the ASA to see why:

As expected the ASA is dropping this packet because of our deny statement. Using an access-list like this is useful to deny some traffic from hosts that is headed towards the Internet or DMZ. Let’s continue with another example…

This access-list will permit traffic from any device that wants to connect with IP address 192.168.3.3 on TCP port 23. Let’s activate it:

This access-list is now activate on the OUTSIDE traffic and applied to inbound traffic. Let’s test it by telnetting from R2 to R3:

Great we are able to connect from R2 to R3. Let’s verify this on the ASA:

You can see that we have a hit on our permit statement. Last but not least, let’s take a look at an example where we use an access-list for outbound traffic…

In the previous examples I showed you how to use inbound access-lists. This time we’ll use an outbound access-list. For example, let’s say that we want to ensure that all our hosts and servers that are located in the inside or DMZ can only use one particular DNS server on the outside. We can create an access-list like this:

38 more replies! Ask a question or join the discussion by visiting our Community Forum