NAT Port Forwarding is useful when you have a single public IP address and multiple devices behind it that you want to reach from the outside world. Take a look at the example below: 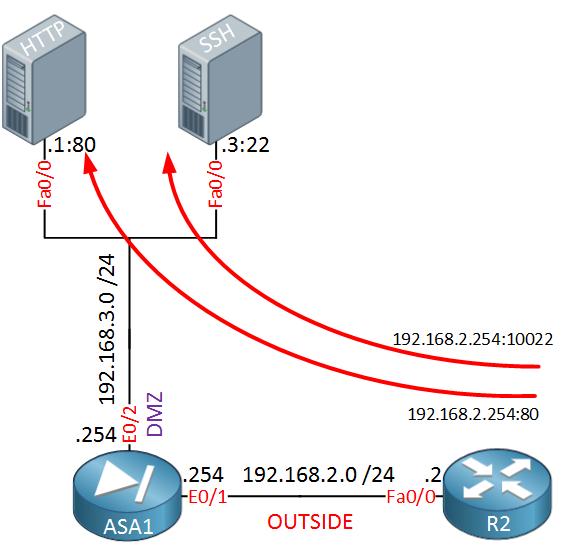 In the topology above we have an ASA firewall with a DMZ and two servers…a HTTP server and a SSH server. Let’s imagine that the IP address on the ASA’s E0/1 interface (192.168.2.254) is a public IP address. Our goal is to make sure that we can reach these servers from the outside world. R2 is only there so we have a device in the “outside” so we can try if NAT is working.

Let me show you how to configure this. We start with the HTTP server:

We create a network object that specifies the real IP address of the web server and then we create our NAT rule. By using the keyword interface we tell the ASA to use the IP address on the (outside) interface. The first port number is the port that the server is listening on, the second port number is the outside port number.  Let’s configure another PAT entry for the SSH server:

This network object is similar to the first one but you can see I used a different port number for the outside. Whenever someone connects on TCP port 10022, it will be forwarded to TCP port 22. This takes care of the NAT rules but don’t forget to create an access-list or our traffic will be dropped:

63 more replies! Ask a question or join the discussion by visiting our Community Forum