Cisco Catalyst Switches have a feature called SPAN (Switch Port Analyzer) that lets you copy all traffic from a source port or source VLAN to a destination interface. This is very useful for a number of reasons: 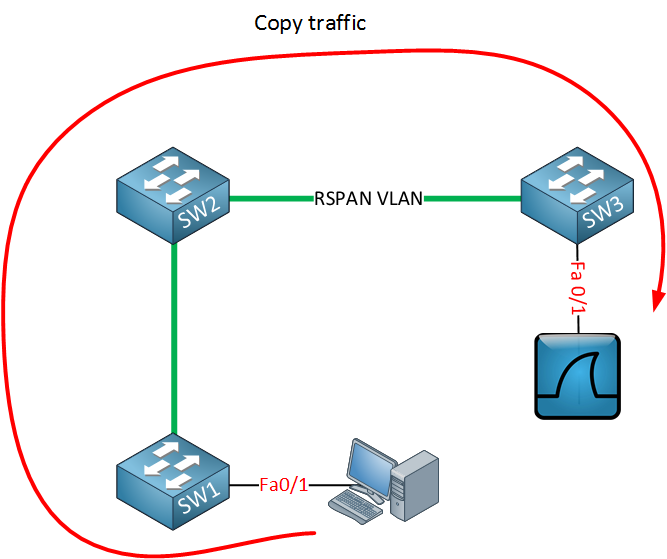 When you use RSPAN you need to use a VLAN that carries the traffic that you are copying. In the picture above you see SW1 which will copy the traffic from the computer onto a “RSPAN VLAN”. SW2 doesn’t do anything with it while SW3 receives the traffic and forwards it to a computer that has wireshark running. Make sure the trunks between the switches allow the RSPAN VLAN.

Both SPAN and RSPAN have some restrictions, I’ll give you an overview of the most important ones:

This should give you an idea of what SPAN / RSPAN are capable of. The configuration is pretty straight-forward so let me give you some examples…

Let’s start with a simple configuration. I will use the example I showed you earlier:

As you can see, by default it will copy traffic that is transmitted and received (both) to the destination port. If you only want the capture the traffic going in one direction you have to specify it like this:

Just add rx or tx and you are ready to go. If interface FastEthernet 0/1 were a trunk you could add a filter to select the VLANs you want to forward:

This filter above will only forward VLAN 1 – 100 to the destination. If you don’t want to use an interface as the source but a VLAN, you can do it like this:

So far so good? Let’s look at RSPAN!

To demonstrate RSPAN I will use a topology with two switches: 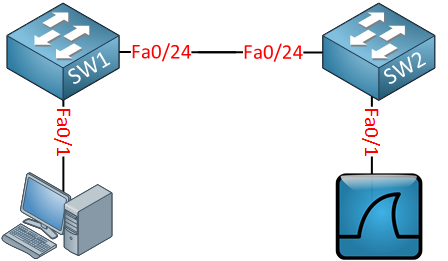 First we need to create the VLAN and tell the switches that it’s a RSPAN vlan. This is something that is easily forgotten. Secondly we will configure the link between the two switches as a trunk:

80 more replies! Ask a question or join the discussion by visiting our Community Forum