In this lesson, I’ll give you a general overview of what LANs (Local Area Network) are. A LAN is, as the name implies, a local network. This network could be as small as two computers that are connected to each other or large, with thousands of devices connected. They keyword here is “local”.

Once you use connections for external resources, for example, an Internet connection we call it a WAN (Wide Area Network) connection. We use a WAN connection to reach other remote LANs or servers on the Internet.

On our local area network, there is one dominant protocol called Ethernet. This is the technology that we use for wired LANs. Ethernet is a standard, published by the IEEE (Institute of Electrical and Electronics Engineers) which describes the protocols, cabling, connectors, etc. that we use.

The SOHO (Small Office Home Office) LAN is what most of are familiar with it. It’s what you are using at home for Internet connectivity and perhaps to share some files between computers. In its most simple form, it’s only a switch and two computers:

This allows the two computers to communicate with each other. Perhaps to share some files or play a multiplayer game. 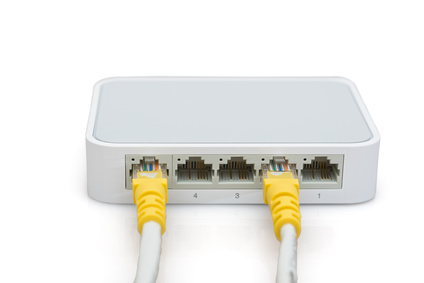 The cables that we use here for Ethernet are UTP (Unshielded Twisted Pair) cables. Besides wired connectivity, we also see a lot of wireless connectivity nowadays. Wireless networking is also based on standards that are published by the IEEE. Everything that is wireless related starts with 802.11. Most people have seen or heard about 802.11a, 802.11b, 802.11g or 802.11n before since it’s often advertised on boxes of wireless devices. 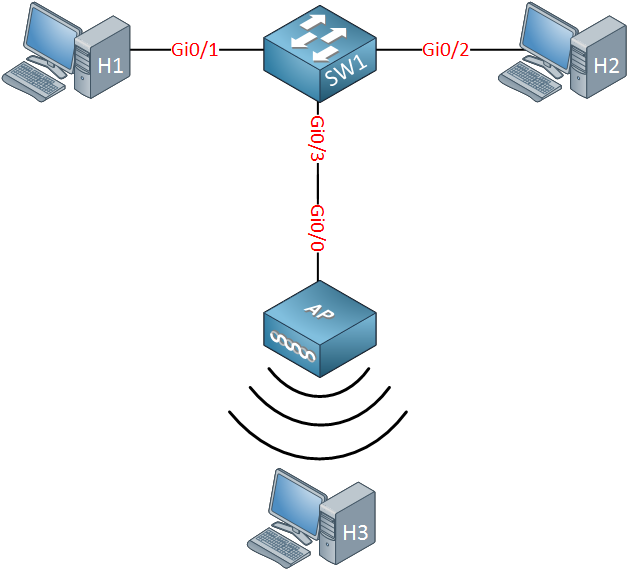 For wireless connectivity, we add an access point to our network. This allows the wired and wireless devices to communicate with each other. If you want to leave your LAN and communicate with the outside world, you will need a router: 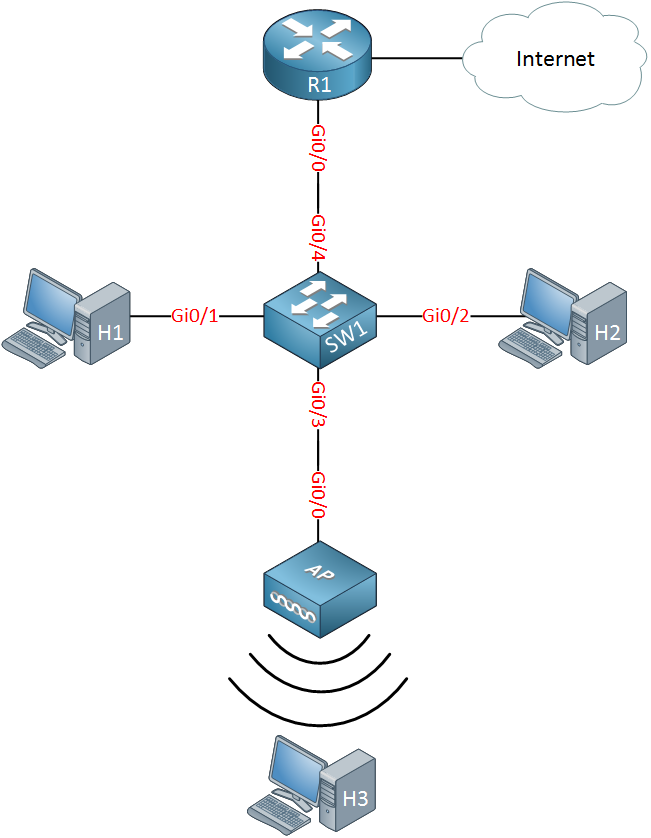 The router uses Ethernet for connectivity with your local network. On the WAN side, it uses another technology like DSL, cable, satellite, 4G/LTE to communicate with the Internet provider.

At home, you probably use a router that looks like the one below: 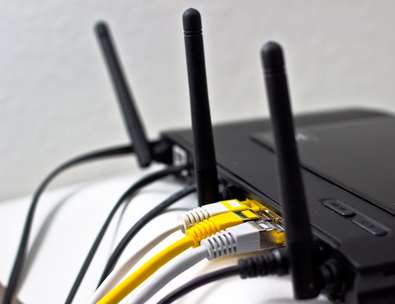 We call this device a router but in reality, it’s a router with an integrated switch and integrated access point. It combines the different functions into a single device.

Enterprises typically use the same technology as SOHO LANs but on a larger scale. There might be hundreds or thousands of devices connected to the network that is located in one or multiple buildings. Here’s an example: 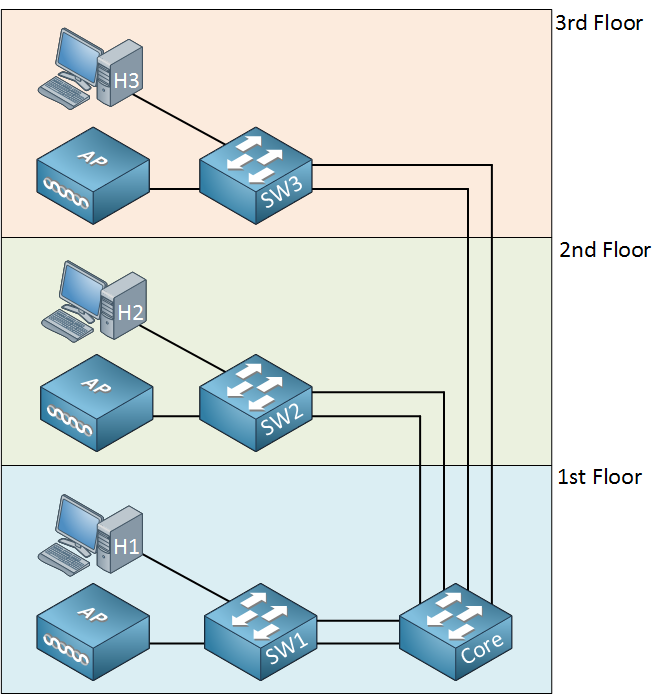 Above we see the network of one building. On each floor, there is a switch for wired connectivity to the computers and other devices like printers. There’s also an access point for wireless connectivity. Each switch on a floor is connected to a central switch called a “Core switch”. For redundancy and bandwidth reasons, we often use multiple cables between the switches. Larger networks with two buildings might look like this: 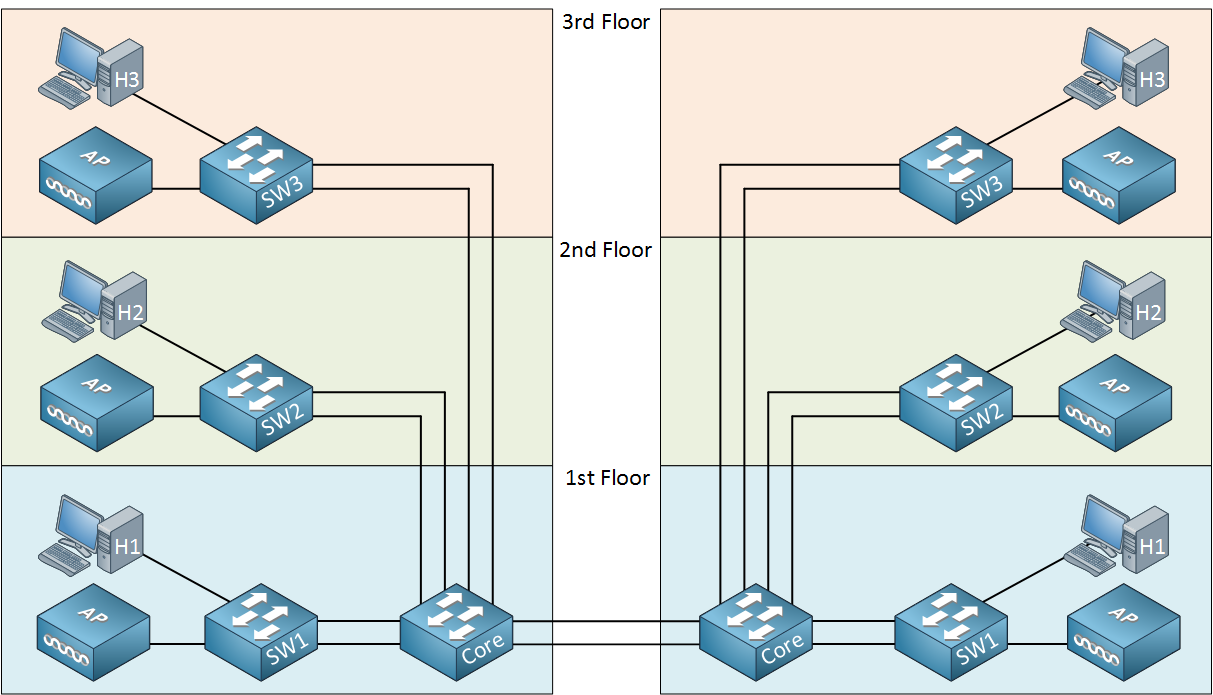 We still have a switch for each floor but the core switches are connected to each other. These core switches might be connected to a router for WAN connectivity. For even larger networks, we have different design models. This is something we will discuss in other lessons.

LANs (Local Area Network) use Ethernet as the primary technology for wired connectivity. Some of the network devices we use on our LAN are switches, access points, and routers. Ethernet is the dominant standard that is used on our LAN, wireless devices use another standard.

In other lessons, we will dive into the different protocols that are used on our switches, routers and access points.