In this lesson we’ll take a look at the basics of multicast. You will learn what multicast is, how it works and the different protocols that are required.

First of all, let’s talk about what multicast is…

There are three types of traffic that we can choose from for our networks:

What if we want to send a message from one source to a group of receivers? That’s when we use multicast.

Unicast vs Broadcast vs Multicast

Why do you want to use multicast instead of unicast or broadcast? That’s best explained with an example. Let’s imagine that we want to stream a high definition video on the network using unicast, broadcast or multicast. You will see the advantages and disadvantages of each traffic type. Let’s start with unicast:

Above we have a small network with a video server that is streaming a movie and four hosts who want to watch the movie. Two hosts are on the same LAN, the other two hosts are on another site that is connected through a 30 Mbit WAN link.

Each additional host that wants to receive this video stream will put more burden on the video server and requires more bandwidth from the WAN link. Right now we require 2x 6Mbps of bandwidth for H3 and H4. When four more hosts would join on the right side, our WAN link would be completely saturated.

What about the LAN on the left side? If these are Gigabit links then a couple of hosts watching a movie will be no problem. What if there’s 150 users that want to watch the movie? That’s when we start running into issues.

The main problem with unicast traffic is that it is not scalable. Are there any advantages? It’s simple since unicast works “out of the box”. You will see that multicast requires some additional protocols to make it work. Also, multicast only supports UDP traffic so we can’t use the advantages of TCP like windowing and acknowledgments.

What about broadcast traffic?

What about multicast traffic?

Multicast traffic is very efficient. This time we only have two hosts that are interested in receiving the video stream. The video server will only send the packets once, the switches and routers will only forward traffic to the hosts that want to receive it. This reduces the load of the video server and network traffic in general.

When using unicast, each additional host will increase the load and traffic rate. With multicast it will remain the same: 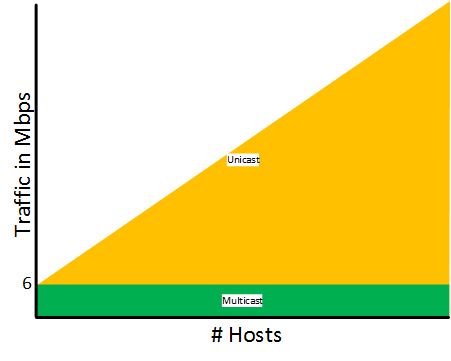 Multicast is efficient but it doesn’t work “out of the box”. There are a number of components that we require:

First of all we use a designated range of IP address that is exclusively used for multicast traffic. We use the class D range for this: 224.0.0.0 to 239.255.255.255. These addresses are only used as destination addresses, not as source addresses. The source IP address will be the device that is sending the multicast traffic, for example the video server.

We also require applications that support multicast. A simple example is the VLC mediaplayer, it can be used to stream and receive a video on the network. 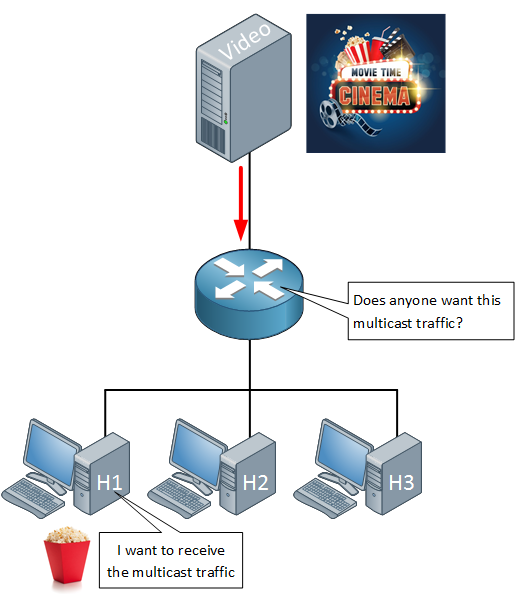 IGMP helps the router to figure out on what interfaces it should forward multicast traffic but what about switches? Take a look at the following image: 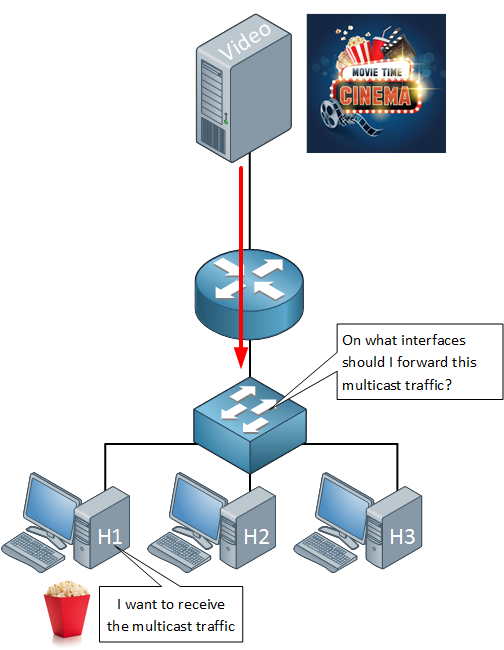 Last but not least, we need a multicast routing protocol: 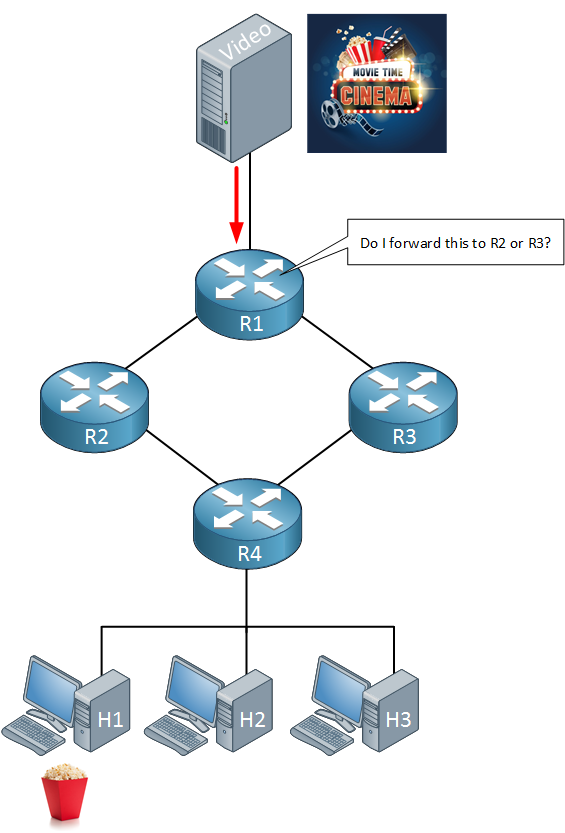 Above we have our video server that is forwarding multicast traffic to R1. On the bottom there’s H1 who is interested in receiving it.

To accomplish this, we use a multicast routing protocol:

The most popular multicast routing protocol is PIM which we will cover in different lessons.

In this lesson you have learned the basics of multicast. You have seen the difference between unicast, broadcast and multicast and how multicast is far more scalable than the other two traffic types. We also discussed the different protocols that are required to make multicast work:

Multicast has many advantages, the main advantage is the scalability compared to unicast traffic. One of the disadvantages is that we require applications that support multicast and we have to configure the network to support it.

In the next lessons, we’ll take a close look at IGMP, PIM and how to configure multicast. I hope you enjoyed this lesson, please share it with your friends. If you have any questions feel free to leave a comment in our forum.

4 more replies! Ask a question or join the discussion by visiting our Community Forum