The main goal of a router is to route packets. In other words: when it receives an IP packet it has to look at the destination address, check the routing table and figure out the next hop where to forward the IP packet to. We use routing protocols to learn different networks and to fill the routing table.

Here’s an illustration to visualize this: 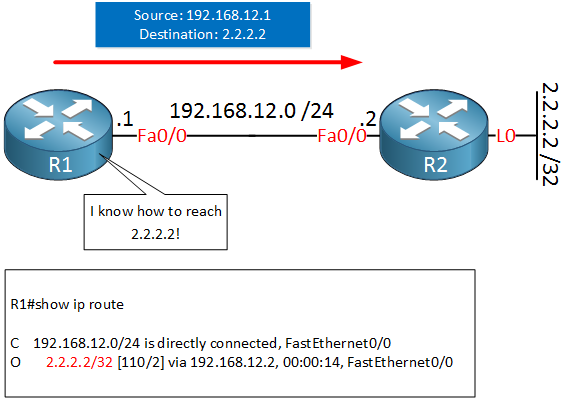 Everything I explained above applies to unicast traffic. What about multicast traffic? Let’s look at another example:

Above we see R1 who receives a multicast packet from some video server, the destination address is 239.1.1.1. The routing table however is a unicast routing table. There’s no information about any multicast addresses in there. Our router will have no idea where to forward it’s multicast traffic to…

A multicast router can tell its neighbor that it doesn’t want to receive the multicast traffic anymore. This happens when:

There are a number of dense mode routing protocols:

PIM (Protocol Independent Multicast) is the most popular multicast routing protocol which we will discuss in other multicast lessons.

Multicast routing is vulnerable to routing loops. One simple loop-prevention mechanism is that routers will never forward multicast packets on the interface where they received the packet on. There is one additional check however called RPF (Reverse Path Forwarding). Take a look at the example below:

Above we have R1 which receives a multicast packet which is flooded on all interfaces except the interface that connects to the video server. I’m only showing the packet that is flooded towards R3 here:

We now have a multicast routing loop. We can prevent this by implementing the RPF check:

When a router receives a multicast packet on an interface, it looks at the source IP address and does two checks:

When the multicast packet is received on the interface that matches the information from the unicast routing table, it passes the RPF check and we accept the packet. When it fails the RPF check, we drop the packet.

Let me visualize this with an example:

Above we see R1 which floods the multicast traffic to R2 and R3. R2 also floods it to R3.

R3 will then flood the multicast packet towards R2 who will also do a RPF check. It will drop this packet since R2 uses its interface towards R1 to reach 192.168.1.100.

At this moment you might be thinking that dense mode is very inefficient with its flooding of multicast traffic. When you only have a few receivers on your network then yes, you will be wasting a lot of bandwidth and resources on your routers.

The alternative is sparse mode which is far more efficient. Sparse mode multicast routing protocols only forward the multicast traffic when another router requests it. It’s the complete opposite of dense mode:

27 more replies! Ask a question or join the discussion by visiting our Community Forum