When you have a redundant switched topology, spanning-tree will block some of the interfaces to create a loop-free topology. Another method to deal with redundant topologies is by using flexlinks. When you configure FlexLinks you’ll have an active and standby interface. Here’s an example: 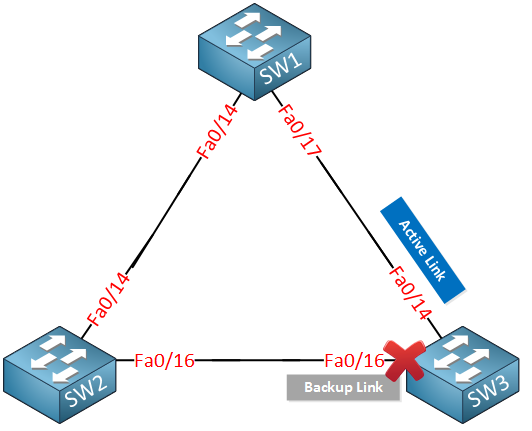 In the topology above spanning-tree would normally block one of the interfaces to create that loop-free topology. This time however we are going to use flexlinks. What happens is that one interface will be the active link and the other one will be a backup link. The backup link is down and only comes up when the active link fails.

I can configure this on SW3:

When you configure interfaces as FlexLinks they will not send BPDUs. There is no way to detect loops because we don’t run spanning-tree on them. Whenever our active interface fails the backup interface will take over.

Let’s look at the configuration…

I will configure SW3 so that interface Fa0/14 is the active interface and Fa0/16 becomes a backup:

You can see spanning-tree is being disabled for these interfaces.

100% Satisfaction Guaranteed!
You may cancel your monthly membership at any time.
No Questions Asked!
Previous Lesson
Troubleshooting Spanning-Tree
Next Lesson
Introduction to Etherchannel