In this lesson, we’ll take a look at EIGRP (Enhanced Interior Gateway Routing Protocol) which is Cisco’s routing protocol. If you are unfamiliar with distance vector and RIP I highly recommend to read my Introduction to RIP first before continuing.

EIGRP stands for Enhanced Interior Gateway Routing Protocol and is a routing protocol created by Cisco. Originally, it was only available on Cisco hardware but since a few years, it’s now an open standard. EIGRP is called a hybrid or advanced distance vector protocol and most of the rules that apply to RIP also apply here: 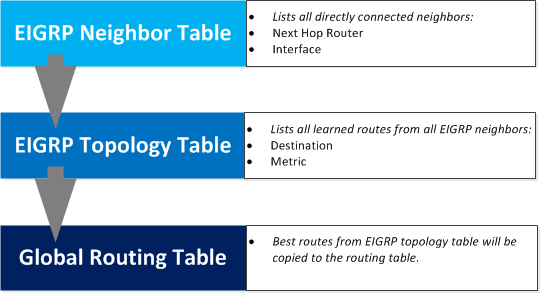 Selecting the best path with EIGRP works a bit different than other routing protocols so let’s see it in action:

We have three routers named R1, R2 and R3. We are going to calculate the best path to the destination which is behind R3.

EIGRP uses a rich set of metrics namely bandwidth, delay, load and reliability which we will cover later. These values will be put into a formula and each link will be assigned a metric. The lower these metrics the better.

In the picture above I have assigned some values on the interfaces, if you would look on a real EIGRP router you’ll see the numbers are very high and a bit annoying to work with.

We are not done yet since there is something else that R2 will save in its topology table. We know the advertised distance is 5 since this is what R3 told us. We also know the metric of the link between R2 and R3 since this is directly connected. R2 now knows the metric for the total path to the destination, this total path is called the feasible distance and it will be saved in the topology table.

You have now learned two important concepts of EIGRP. The advertised distance, your neighbor tells you how far it is for him to reach the destination and the feasible distance which is your total distance to get to the destination.

We are not done yet since R1 is also running EIGRP. R2 is sending its feasible distance towards R1 which is 15. R1 will save this information in the topology table as the advertised distance. R2 is “telling” R1 the distance is 15.

142 more replies! Ask a question or join the discussion by visiting our Community Forum