VLAN Hopping is an attack where the attacker is able to send traffic from one VLAN into another. There are two different methods to accomplish this:

Here’s an illustration for the double tag method: 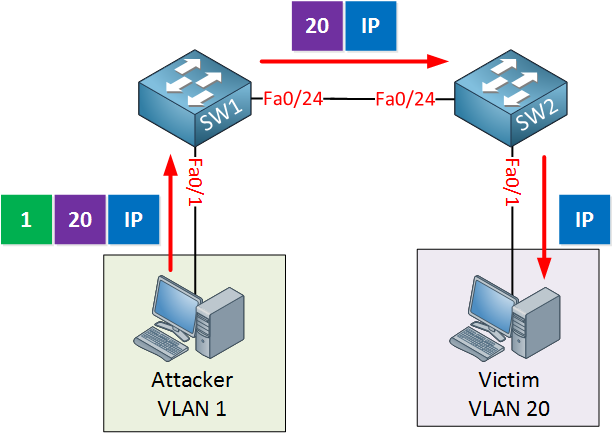 In the picture above we have two switches, SW1 and SW2. The attacker is in VLAN 1 and our victim is in VLAN 20. Here are the configurations of the switches:

As you can see above the interfaces that connect to the computers are in access mode, the attacker is in VLAN 1 while our victim is in VLAN 20. The interface between the two switches is a 802.1Q trunk.

Does the double tagging method actually work? The idea is that the switch will just accept any frames even if it’s in access mode. I tried this on a Cisco Catalyst Switch 3560 running the IP services 12.2(55)SE10 image.

To test this, I used scapy on a computer running Kali:

Here’s what you see above:

Here’s a capture of this packet in wireshark:

If everything works then my switch should accept the frame, forward it on the trunk and broadcast it in VLAN 20. My 3560 switch doesn’t like it at all though:

100% Satisfaction Guaranteed!
You may cancel your monthly membership at any time.
No Questions Asked!
Previous Lesson
Storm-Control
Next Lesson
DHCP Snooping