In this lesson, we’ll take a look at the differences between virtual machines and containers.

Back in the days, a physical server would only run a single operating system with one or a few applications. We started with CPUs with a single core, then hyperthreading, and then multiple cores. The amount of memory in a single physical server also increased and became more affordable.

One of the reasons virtualization is now so popular is that servers were under-utilized. We can easily run multiple operating systems and multiple applications on a single physical server. A virtual machine is pretty identical to a physical server except it’s virtual. We have virtual hardware (CPUs, memory, storage, etc.) which runs on a hypervisor.

The hypervisor is the server virtualization software that runs on the physical server. This is where we create virtual machines and configure how much CPU cores, memory, storage, etc. each virtual machine has. There are two hypervisor types:

Even a type 1 hypervisor has something of an OS. For example, VMWare ESXi uses a proprietary kernel called the VMkernel. It’s very lightweight compared to a “full” operating system like Microsoft Windows or any Linux distribution.

One advantage of virtual machines is that we are familiar with physical servers. It’s easy to understand, it’s a server, but virtual. We can use all the management and security tools we know to manage our physical or virtual servers.

One disadvantage of virtual machines is that there is a lot of overhead. For example, let’s say I want to run the freeradius application. A virtual machine with the Ubuntu 18.04 LTS operating system and nothing else installed is already ~3400 MB. Freeradius and its dependencies require about 5 MB. This brings my total storage to 3400 + 5 = 3405 MB.

That’s 3405 MB of storage only to run a simple application. Starting a virtual machine can take minutes, it has to boot the OS and start your applications 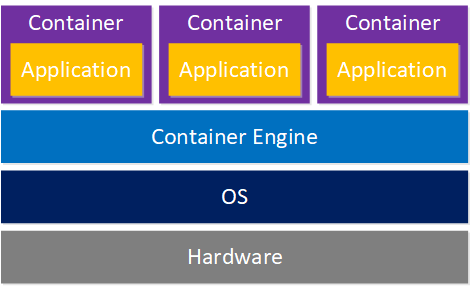 Containerization has many advantages:

Are there any disadvantages to containers? Containers are isolated from each other on the process level which could be less secure than a virtual machine which is fully isolated.

Another issue is security. Containers are based on a blueprint which is basically like a snapshot. You build the container image from the blueprint, and the container doesn’t change anymore. If you want to update your container, you rebuild a new container image. This is different from a (virtual) server which you configure to install the latest security updates automatically.

100% Satisfaction Guaranteed!
You may cancel your monthly membership at any time.
No Questions Asked!
Previous Lesson
Cloud Workload Migration
Next Lesson
Cloud Connectivity