IPv4 addresses have a subnet mask but instead of typing something like 255.255.255.0 we use a prefix length for IPv6. Here is an example of an IPv6 prefix:

When calculating subnets for IPv4 we can use the subnet mask to determine the network address and for IPv6 we can do something alike. For any given IPv6 address we can calculate what the prefix is but it works a bit different.

Let me show you what I’m talking about, here’s an IPv6 address that could be assigned to a host:

What part from this IPv6 address is the prefix and what part identifies the host?

This part has 16 hexadecimal characters. 16 x 4 means 64 bits. So that’s the prefix right there. The rest of the IPv6 address identifies the host:

So we figured out that “2001:1234:5678:1234” is the prefix part but writing it down like this is not correct. To write down the prefix correctly we need to add zeros at the end of this prefix so that it is a 128 bit address again and add the prefix length:

That’s the shortest way to write down the prefix. Let’s look at another example:

Before we can see what the prefix is, we should write down the complete address as this one has been shortened (see the :: ). Just add the zeros until we have a full 128 bit address again:

Now we can add zeros at the end to make it a 128 bit address again and add the prefix length:

That’s a good looking prefix but we can make it a little shorter:

Depending on the prefix length it makes the calculations very easy or (very) difficult. In the examples I just showed you both prefixes had a length of 64. What if I had a prefix length of /53 or something?

When the prefix length is not a multiple of 16 or 4 it means we have to do some binary calculations. Let me give you an example!

This is our IPv6 address and I would like to know the prefix for this address. Where do I start?

First I have to determine in what “block” my 53rd bit is located:

Somewhere in the blue block we will find the 53rd bit. To know what the prefix is we will have to calculate those hexadecimal characters to binary: 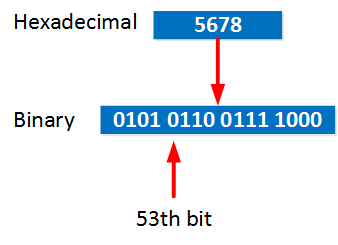 We now have the block that contains the 53rd, this is where the boundary is between “prefix” and “host”:

100% Satisfaction Guaranteed!
You may cancel your monthly membership at any time.
No Questions Asked!
Previous Lesson
Creating your own Subnetting Cheat Sheet
Next Lesson
IPv6 Summarization

18 more replies! Ask a question or join the discussion by visiting our Community Forum